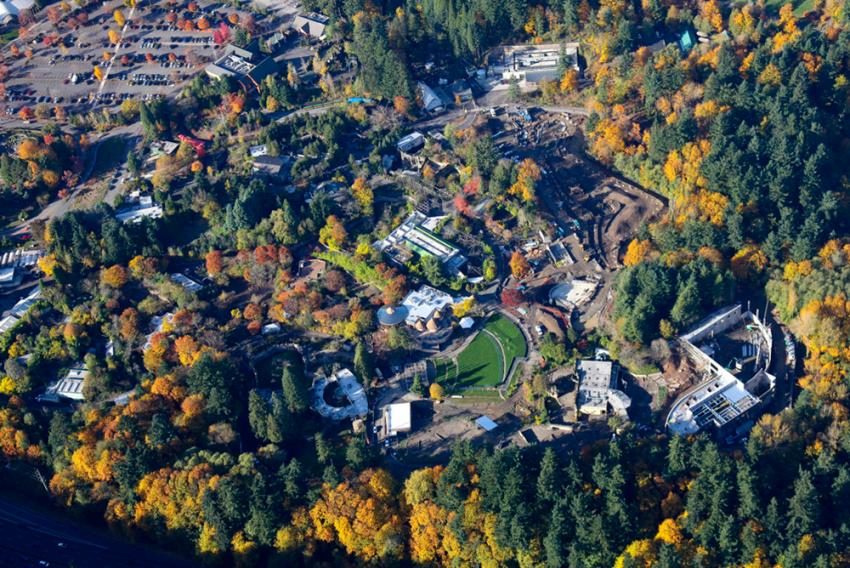 At a meeting of the Metro Council yesterday, the Oregon Zoo Bond Citizens' Oversight Committee commended Metro and zoo staff for their effectiveness in implementing a host of projects funded by the community-supported bond measure as well as for its responsiveness in addressing committee recommendations and questions.

Among the major projects examined by the committee: the new Condors of the Columbia habitat, which came in under budget and was very successful at hiring minority, women and emerging small business (MWESB) firms; a new education center, set to begin construction in September; and the expansive Elephant Lands habitat, scheduled for completion in late fall.

Construction of Elephant Lands reaches a major milestone this month as crews complete work on the Elephant Plaza visitor area, a huge new indoor facility, and a portion of the habitat's large northern expanse. The project's $57 million budget also included construction of a service access road, rerouting of the zoo train loop and relocation of the zoo's Wild Life Live headquarters.

The committee's most direct recommendation had to do with plans for constructing a remote elephant center, which — while not specified in the 2008 ballot measure — has been an ongoing area of interest for the zoo. Zoo and Metro staff have visited more than a dozen prospective properties, and the zoo currently holds an option on the former Roslyn Lake site in Clackamas County.
In addressing this initiative, committee members recommended Metro Council "make a final decision in 2015 regarding the feasibility of creating and operating an REC, and whether the currently considered site would be appropriate for such a facility."

The committee reiterated its previous recommendations that bond funds not be "expended on infrastructure and habitat without an adequate plan for meeting ongoing costs of operating the offsite facility" and raised further concerns that "the scope of research, planning, and discovery regarding the feasibility of an offsite facility is a time-consuming responsibility that directly competes for staff resources with the ongoing zoo construction site projects."

The Oregon Zoo Bond Citizens' Oversight Committee — an independent group of local professionals with expertise in animal welfare, sustainability, public budgeting and construction — is charged with overseeing the zoo bond program "to ensure that structure, expenditures and defined goals are on track."

Metro Council President Tom Hughes applauded the citizen group for its diligence in overseeing the bond's implementation and its thoroughness in reporting to the Metro Council and voters.

"We on the Metro Council appreciate the added credibility and assurance this committee provides to the community regarding the integrity of bond program management," Hughes said. "We plan to discuss these recommendations further, and we are very pleased by all the significant improvements to our community's zoo."