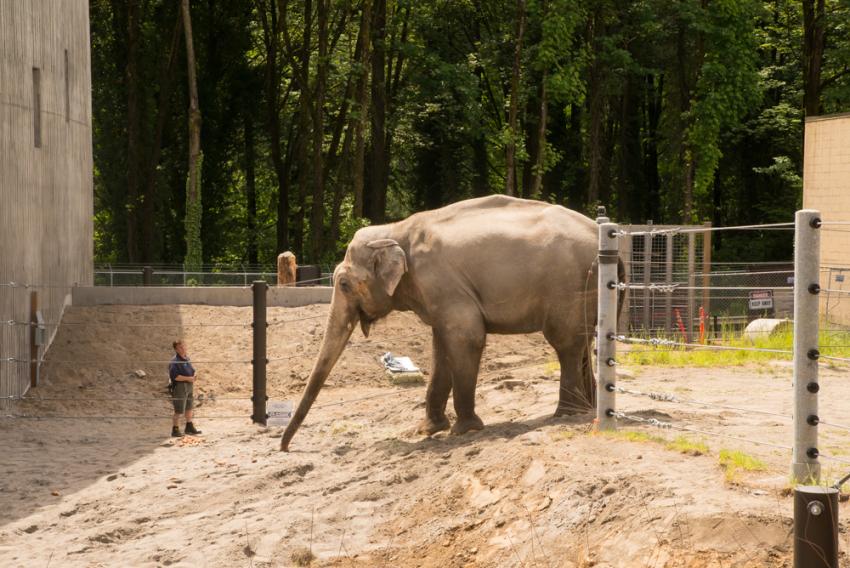 After six days, 400 pounds of carrots, a ton of sweet potatoes and an equal measure of encouraging words, the famously change-averse Packy finally ambled into the new indoor portion of Elephant Lands yesterday — one week behind the rest of the Oregon Zoo elephant family, but right on time as far as keepers were concerned.

"Packy does everything on his own schedule," said Bob Lee, the zoo's elephant curator. "It took Tusko about six minutes to make this move, and it took Packy six days. That's just his nature."

"Packy was the first elephant born here back in 1962, and we designed this new habitat specifically with him in mind."

"For the first couple days, we were actually measuring success in inches," said Shawn Finnell, senior elephant keeper. "Packy would take one or two steps into the new yard — just far enough to snag a couple of sweet potatoes with his trunk — and then return to more familiar surroundings."

Construction of the expansive new Elephant Lands reached a major turning point this month with completion of the new indoor facility as well as the North Meadow portion of the habitat. Watching Packy take those first tentative steps toward the new space last week, keepers couldn't help noting the symbolism of his position.

With work on Elephant Lands now more than 85 percent complete, Packy was poised almost literally between the past and the future: behind him, the Eisenhower-era elephant barn in which he was born — constructed when the zoo first moved to its current Washington Park location in 1959 — and before him, the impressive new indoor facility that promises to usher in a new era in elephant welfare.

"He is the reason for all of this," said Lee, who has worked with Packy for more than 15 years. "He is the connection between the old and the new. Packy was the first elephant born here back in 1962, and we designed this new habitat specifically with him in mind — both as a comfortable home for him to live out his golden years in, and as a legacy to all he has helped us learn about this amazing species."

At 53, Packy is the oldest male of his species on this continent — born at a time when it was extremely rare for elephants to be born in zoos at all, and rarer still for those that were born to survive. Packy is also notoriously reluctant to try anything new, and keepers breathed a six-ton sigh relief when he finally decided to venture inside the new building.

"Normally, Packy needs a lot of reassurance before he'll try anything new," Finnell said. "But yesterday he looked into that room, saw how big it was, and just walked right in. That's a huge deal for him, and it's probably the biggest compliment you could pay to everyone who worked on designing and building this new space."

Lee said the entire elephant family will be acclimating to the new area at its own pace in the coming weeks, and will soon be moving into the northern portion of the habitat as well, where visitors will once again be able to see them. Forest Hall will open to visitors later this year once the entire habitat opens.