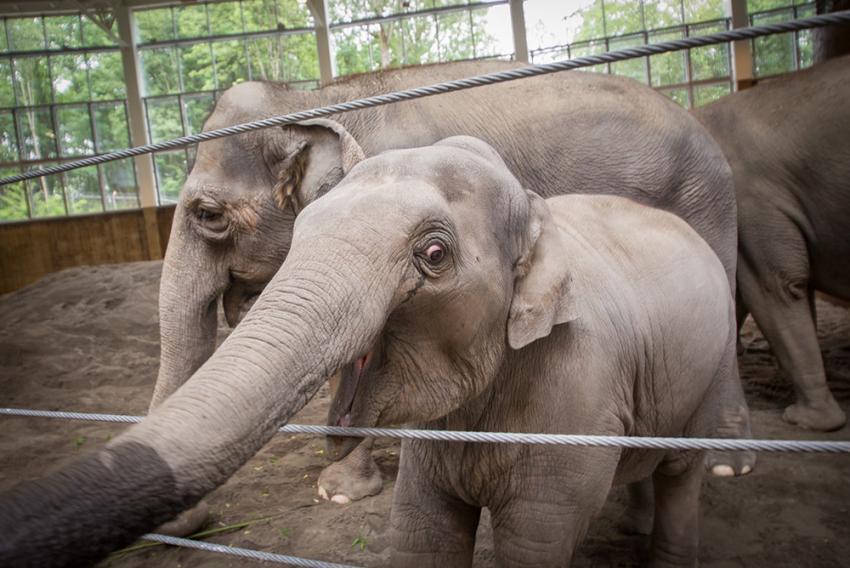 At a little after 10 a.m. this morning, Oregon Zoo keepers opened the back door to the old elephant barn — constructed when the zoo first moved to its current Washington Park location in 1959 — and the 13,000-pound Tusko stepped out, pausing briefly to survey the scene.

The familiar east sand yard was there, but now it opened onto an entirely new vista — another yard that led to a massive new building: 32,000 square feet, with a roof reaching up to 43 feet at its highest point.

It didn't take the 44-year-old bull elephant long to decide what to do. As keepers encouraged him with some of his favorite fruits and vegetables, Tusko strode directly over to the new building and calmly walked inside.

Construction of the $57 million Elephant Lands, the most ambitious project in zoo history, reached a big milestone yesterday as crews completed work on the new indoor portion of the habitat. And today, Portland's famous elephant family ventured into these new digs for the first time, taking a big step into history.

"This is going to be huge," said Bob Lee, the zoo's elephant curator. "The transition has been going great so far. Tusko walked right over into the new building and has already started shifting through rooms." Once Tusko was settled, the females got their turn. "Lily was the bravest of them all," Lee said. "She ran ahead of everyone to pick up treats and then would run back to the herd excitedly. Finally, as Shine became more confident, she led Rose and Lily into Forest Hall. Chendra stayed in the old east yard and was reluctant to go down the slight slope into the new habitat, so we stopped feeding the herd in Forest Hall and they went back to see Chendra. We began calling the herd back to Forest Hall again and Chendra went along with Rose and Lily this time."

Lee said Samudra will join the others at Forest Hall this afternoon, and tomorrow the elephant-care team will begin what might be the most difficult transition: enticing old-timer Packy to check out the new space.

The 53-year-old pachyderm is notoriously set in his ways and reluctant to try anything new — but Packy has been spending a lot of time in the east yard recently, and Lee hopes seeing the new indoor facility go up before his eyes will embolden him to venture inside.

He was the only member of the elephant family not to explore the Encounter Habitat, which opened last February, though that wasn't for a lack of opportunity.

"We tried enticing him out the back of the old barn with bananas and some of his other favorite treats, but he only ventured out a couple of steps," Lee said. "That's just his nature. Other elephants, like Tusko and Samudra, are much more adventurous and love to explore new things, but Packy thrives on the familiar."

Lee said the elephant family will be acclimating to the new area at its own pace in the coming weeks, and will soon be moving into the northern portion of the habitat as well. To keep the herd comfortable during the building of Elephant Lands, animal-care staff and construction managers devised a careful phasing plan to gradually expand the elephants' accessible space.

Elephant Lands is the fourth of eight major projects funded by the community-supported 2008 zoo bond measure. Private donors have also played an important role, providing additional funds to enhance conservation education at the exhibit. Four times larger than the zoo's old elephant habitat, Elephant Lands will extend around most of the zoo's eastern end, from south of the concert lawn north into the area formerly housing Elk Meadow.