Swallows move into construction zone, zoo has to wing it 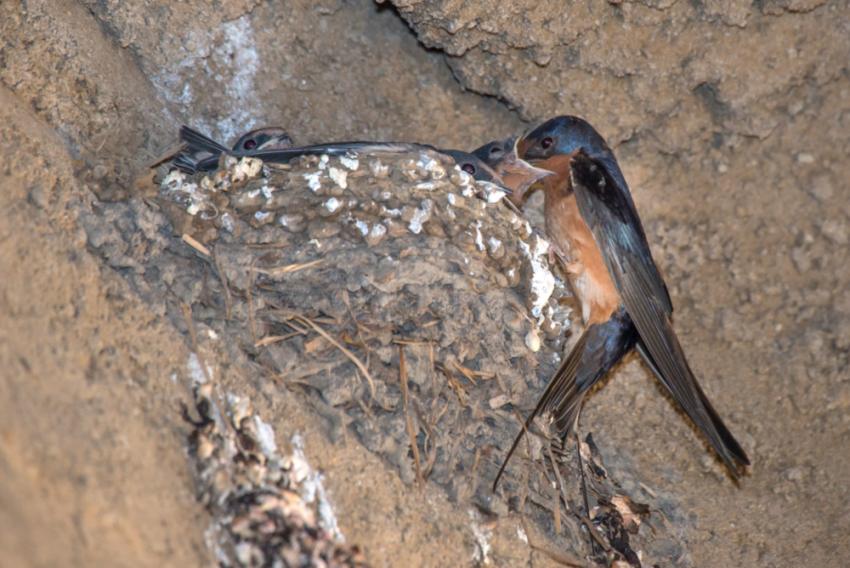 Crews working to complete the Oregon Zoo's new Elephant Lands took an abrupt detour this month after staff discovered a pair of barn swallows raising chicks in an area slated for demolition.

True to their name, barn swallows often nest under the eaves of barns and other human-made structures. Last month, attentive zookeepers noticed some of them darting around the zoo's old elephant barn, and raised concerns that these colorful migratory birds — a federally protected species — might be nesting in the vicinity.

Construction crews were notified, and work was suspended while the zoo's senior bird keeper, Gwen Harris, inspected the area. With approval from the U.S. Fish and Wildlife Service, Harris climbed a ladder to examine potential nesting sites around the demolition zone. 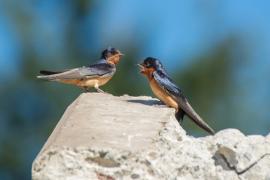 Sure enough, one pair of swallows had constructed a mud nest beneath the overhang of a 25-foot-tall rock prominence in what was formerly the front elephant yard — and peering into the bowl-shaped nest through an extended mirror, Harris spotted a few speckled eggs.

"It was pretty much 'hold everything' at that point," said Jim Mitchell, zoo construction manager. "We created a safety zone around the nesting birds and focused our efforts in other areas. Elephant Lands is a huge project, so there was plenty of work to do elsewhere, and this didn't put us behind schedule."

The chicks have hatched, fledged and left the nest now, but the rock prominence, originally slated for demolition with the rest of the old facilities, remains — conspicuous as the only intact structure remaining in the area. Crews plan to begin dismantling it next week.

Swallows are federally protected under the Migratory Bird Treaty Act of 1918.