Kitra, a 14-year-old female orangutan who arrived here from Cleveland Metroparks Zoo recently, made her Oregon Zoo debut this morning, joining 10-year-old Bob, another recent arrival, in the indoor portion of the zoo's Red Ape Reserve.

The two orangutans have already spent some time together behind the scenes, and are comfortable with each other, according Asaba Mukobi, the zoo's senior primate keeper. 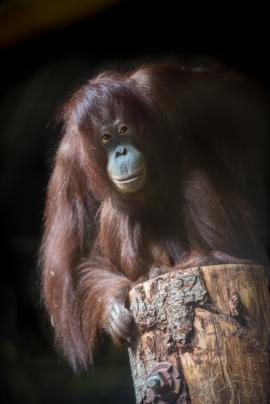 Mukobi expects the new couple will be together most days now, and will remain separate from Red Ape's other two orangs, the 10-year-old Kumar and Inji, who at 55 is the oldest Oregon Zoo resident and one of the oldest orangutans in the world.

Bob and Kitra are Bornean orangutans, a separate species from Kumar and Inji, who are Sumatran orangutans.

The name "orangutan" comes from the Malay "orang," meaning man, and "hutan," meaning wilderness or jungle. According to Mukobi, many zoo visitors are struck by the orangutans' close resemblance to humans.

"Orangutans share nearly 98 percent of their DNA with humans, and visitors feel a very strong connection to them," Mukobi said. "Building on that connection, we're trying to create awareness about what's happening to orangutans in their native lands and let people know how they can help."

Kitra's transfer to the Oregon Zoo was recommended by the Association of Zoos and Aquariums' Species Survival Plan for orangutans. The AZA has established Species Survival Plans for many threatened or endangered species — cooperative programs that help create genetically diverse, self-sustaining populations to guarantee the long-term future of animals. These SSPs also support relevant field projects, research and public education to help prevent animal endangerment and extinction.

"Orangutans are at a really critical point right now in both Borneo and Sumatra," Mukobi said. "The number one threat to their survival is the production of palm oil, which is a common ingredient in everything from candy bars to cosmetics. The good news is that people can urge companies to change the way they produce palm oil in a way that is less harmful to orangutans and other wildlife."

People interested in encouraging major companies to pursue wildlife-friendly palm oil can do so through the Oregon Zoo's Use Your Reach project.

The zoo also supports the Borneo-based Hutan-Kinabatangan Orangutan Conservation Program, which works to research, protect and reduce human-wildlife conflict for species including orangutans and elephants.