Squeaky, spunky pup is recovering at the zoo after a rough start to life near Corvallis

A passing motorist spotted the young otter wandering alongside Highway 58 on June 20, and alerted a local wildlife rehabilitator who collected and cared for the animal while final placement was determined by staff at the Oregon Department of Fish and Wildlife.

"He is playing in his pool, eating voraciously and grooming himself — all behaviors we want to see right now."

The pup, just a couple of months old at the time, was alone, hungry and dehydrated, but was rescued by the Chintimini Wildlife Center in Corvallis. Since the young otter would not be able to survive in the wild without its mother, ODFW contacted the Oregon Zoo to see if it had space available once the pup's health stabilized.

Last Thursday, the tiny pup was transferred to the zoo, where he is currently in the care of veterinarians and keepers. He's estimated to be about 2 or 3 months old, and weighed a little over 4 pounds on arrival.

"He's a spunky little otter," said Julie Christie, senior keeper for the zoo's North America section. "ODFW acted quickly when the lone pup was reported and Chintimini Wildlife Center did a terrific job nursing him back to health. He is very active in his current home. He is playing in his pool, eating voraciously and grooming himself — all behaviors we want to see right now."

Visitors won't get a look at the youngster until later this summer, when he joins the zoo's two adult otters Tilly and B.C. in their Cascade Stream and Pond habitat.

"We have a very good track record with orphaned otters," Christie said. "Our adult otters, Tilly and B.C., were also rescued animals who had a rough start to life." 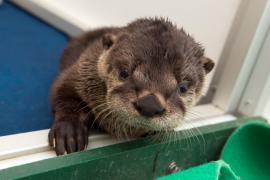 B.C. (short for Buttercup), was found orphaned near Star City, Ark., also in 2009. He was initially taken in by the Little Rock Zoo, but transferred here the following year as a companion for Tilly. The two otters hit it off quickly and have produced two offspring, Molalla and Zigzag. Both are now grown and living in Seattle — Mo at the Seattle Aquarium and Ziggy at the Woodland Park Zoo.