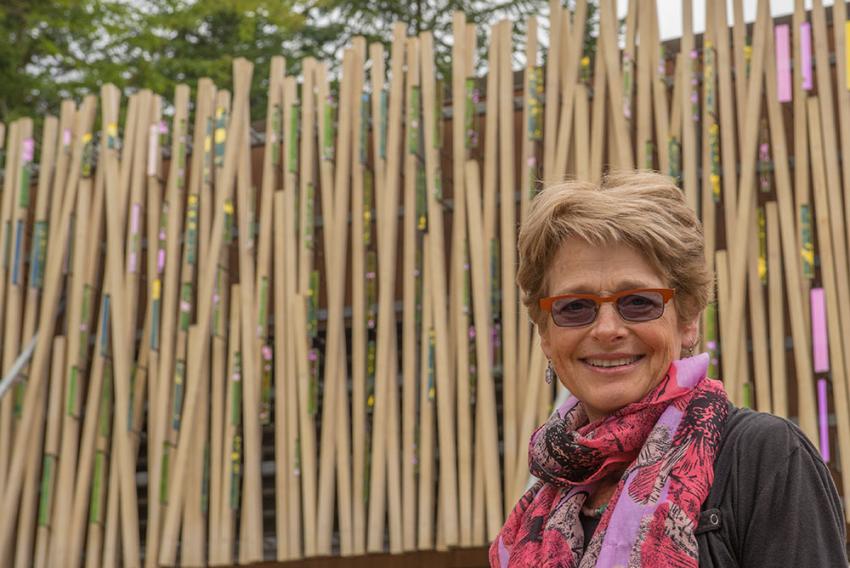 The Oregon Zoo's Elephant Lands, now in its final stages of construction, is raising the bar for elephant care across the country — but not everything noteworthy about the huge new habitat has to do with elephants.

Oregon's Percent for Art legislation ensures a portion of all eligible publicly funded construction projects is spent on public artwork, and that includes work funded by the community-supported zoo bond measure passed in 2008.

One fascinating result for zoo visitors will be "Forest Lights," a site-specific installation of wood, steel and color-shifting glass by Boston-based artist Catherine Widgery, who won a commission to develop two large-scale works at Elephant Lands. 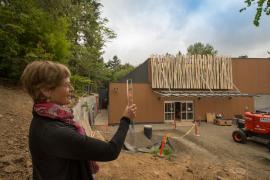 "Catherine's a very accomplished public artist with work around the globe," said zoo project manager Brent Shelby. "For the most part, the zoo's public art collection has been pretty Northwest-centric, and this was a chance to expand the collection and include artists from outside the region."

Widgery, who grew up amid the forests and greenery outside Pittsburgh, infuses her art with a sense of both natural wonder and urban industrial culture. She and her team have built more than 40 site-specific public art projects across North America, including the acclaimed "Leaves of Wind" bus stops that debuted recently in El Paso, Texas.

Made by sandwiching micro-layers of metals and oxides between layers of glass, the material displays one of two different colors depending on light conditions and the angle of view. Once completed, Forest Lights will create a dramatic ever-changing interplay of light between the sun and glass.

The second part of Widgery's commission consists of three vertical towers in the area separating Elephant Lands from the zoo's central lawn. Influenced by Asian culture and design motifs, these towers will also include fragments of reflective glass, casting rainbow-like colors onto the surrounding landscape.

"It will use a similar language of materials as the Forest Hall façade," Shelby said. "But it will be rooted in cultural meanings rather than being about the landscape or foliage."

Elephant Lands is a sweeping expansion of the zoo's Asian elephant habitat that will quadruple the animals' space and dramatically enhance their daily experiences. Work on the new habitat — which has been carefully sequenced to gradually expand the elephants' accessible space in phases — will be completed in the fall of 2015.