Where the antelope play: Bontebok debut at Oregon Zoo 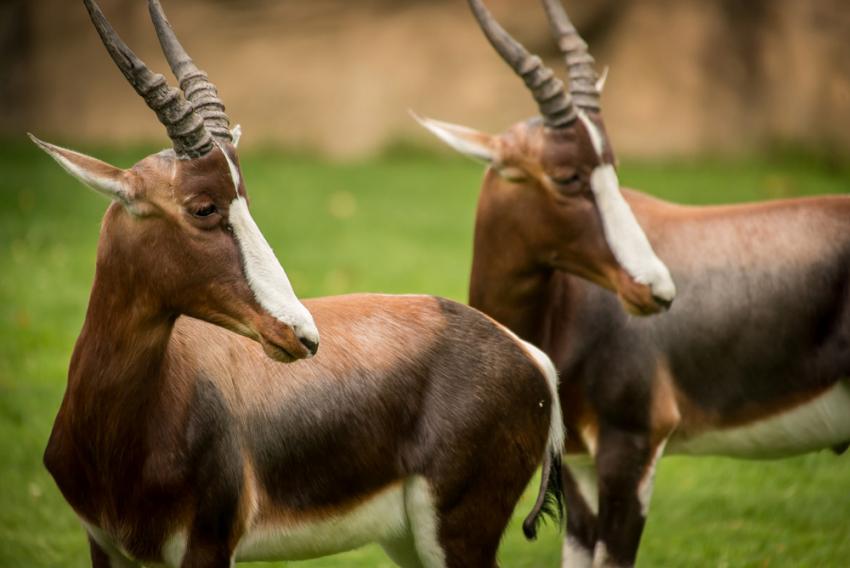 A pair of frisky young bontebok — a species considered among the most handsome and least athletic of African antelope — debuted at the Oregon Zoo this week, grazing in the grass, playfully sparring with one another and exploring the lush African Savanna habitat they'll be sharing with gerenuks and Speke's gazelles.

With its striking chestnut and white coloring, the bontebok might be the best-looking animal you've never heard of. Keepers say the two new arrivals at the zoo are not only handsome but a testament to one of the most amazing conservation successes in history: living proof of the impact people can have — both positive and negative — on wildlife and species conservation. 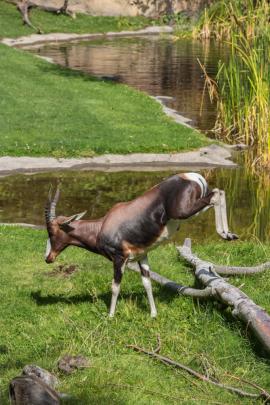 "A couple of centuries ago, the bontebok was well on the way to extinction," said Laura Weiner, senior keeper for the zoo's Africa section. "The fact that they are here today shows what a difference people can make in helping wildlife."

Though the bontebok is unfamiliar to most Americans today, the species "deserves a place in the annals of conservation history," according to The Nature Conservancy's Matt Miller.

"It is arguably the first African animal saved from human-caused extinction," said Miller, writing in the conservancy's science blog this summer. "Its rescue is flat-out one of the most dramatic conservation success stories anywhere."

In a story that roughly parallels that of the American bison, the bontebok was hunted to the brink of extinction in the 18th and 19th centuries by Dutch settlers to southern Africa, many of whom viewed the native antelope there as pests competing for farmland.

Another antelope species, the bluebuck, was declared extinct in 1799, and it seemed inevitable the bontebok would not be far behind.

By 1837, all that stood between the last 17 bontebok on the planet and certain annihilation was a fence. It was that year that some sympathetic farmers enclosed the herd safely inside their own property, effectively creating the first African antelope preserve.

The measure wouldn't have worked except for one evolutionary quirk: Bontebok can't jump. While other antelope species like the impala, eland and kudu almost fly — soaring 10 feet into the air or higher — bontebok can only manage small leaps and could thus be contained by ordinary livestock fencing.

"The ability to jump," Miller said, "would have been a leap into extinction." In 1931, Bontebok National Park was established, and the species gradually started to rebound. Today the bontebok population is estimated to be around 2,500 to 3,000. "The bontebok here at the zoo are fun to watch, but they also represent an incredible conservation story," Weiner said. "While their survival is no longer in doubt, other animals such as rhinos and elephants are now facing crises similar to what the bontebok faced 200 years ago. Hopefully, we can inspire some similar success stories for the future."