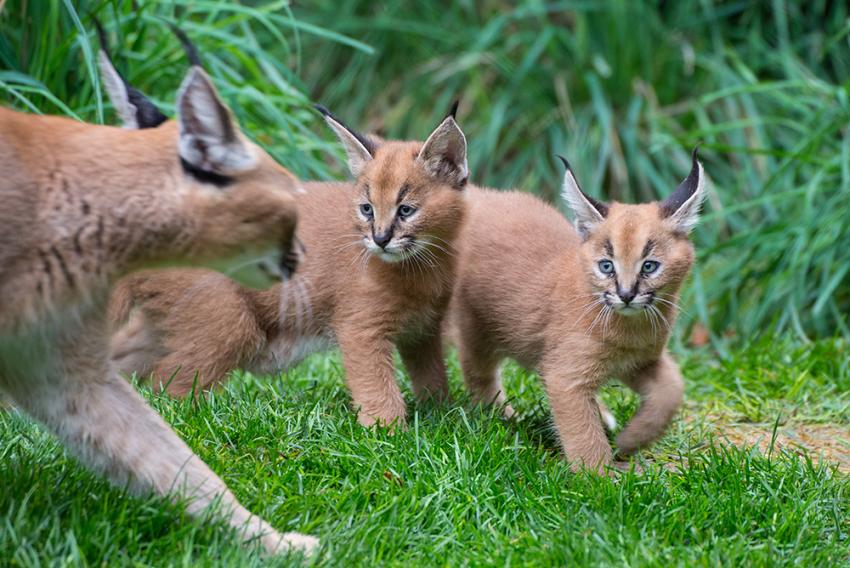 With mom by their side, young caracal kittens begin to explore their outdoor habitat

The Oregon Zoo's two new caracal kittens are 6 weeks old now, and they have just begun to explore their outdoor habitat in the zoo's Predators of the Serengeti area. Peggy and her kittens will have outdoor access from 10 a.m. to 2 p.m. for the next several days — weather permitting — but keepers say they will be easy to miss.

"They've spent a lot of time out of view of visitors so far," said Beth Foster, the zoo's lead caracal keeper. "The space is still new and unfamiliar to them, so they've been hiding a lot, taking things slowly and sticking close to mom."

Caracals are elusive animals by nature, and even the full-grown cats can be hard to glimpse, according to Foster. She says the best time for visitors to try their luck is right at 10 a.m., when they first go outside.

Under the watchful eye of their mom, the kittens ventured outside for the first time on Wednesday — toddling through hollow logs, hiding in the tall grass, and chirping for mom whenever they lost sight of her.

"Peggy's been an excellent and very attentive mother," Foster said. "When her little ones call, she comes right away to check on them."

Peggy gave birth to the kittens last month in a behind-the-scenes maternity den. The two siblings have been healthy since day one and continue to grow rapidly. They now weigh about 2 to 3 pounds each and are just a bit bigger than domestic kittens — but with enormous paws and ears.

"They're in their super-adorable phase," Foster said.

Keepers recently voted to call the pair by the Sanskrit names Nandi (male) and Nisha (female).

Cricket, the kittens' father, will be on exhibit after 2 p.m. Cricket was born at the Lory Park Zoo and Owl Sanctuary in South Africa, and moved to the Oregon Zoo in winter 2011. Peggy came to the zoo in 2009 from a conservation center in Mena, Ark.