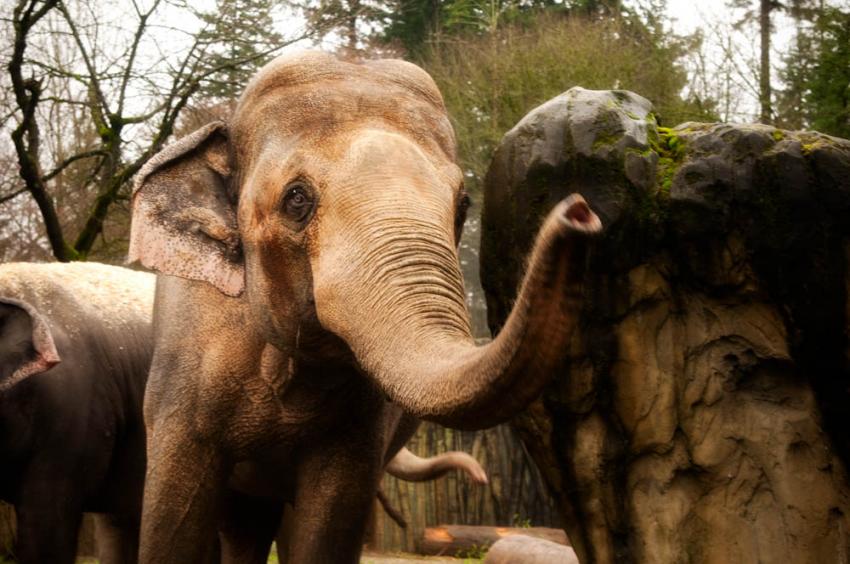 Tusko, one of the oldest and largest males of his species, is humanely euthanized

Asian elephant Tusko, one of the oldest and largest males of his species in North America, was humanely euthanized at the Oregon Zoo today after animal-care staff determined they could no longer help pain and mobility issues stemming from a decades-old leg injury.

A former circus elephant, Tusko traveled around the continent for many years before finding his forever home with Portland's elephant family in 2005. He was one of the largest bull elephants in the country, weighing around 13,000 pounds. At nearly 45 years old, he was also one of the oldest males of his species.

"Tusko was extremely intelligent and very gentle with female elephants and the young ones."

"This is a very sad day, especially for all the keepers and animal-care staff who have been close to Tusko through the years," said Bob Lee, zoo elephant curator. "The ten years Tusko spent at the Oregon Zoo was the longest period he'd ever stayed in one place. We're thankful we were able to give him a good home with our elephant family, and on a personal level I'm thankful I got the chance to know him."

Keepers described Tusko as a bold and confident elephant who loved to test his limits. His energy, strength and spirit are said to live on in the personalities of his two Oregon Zoo offspring, Samudra and Lily, as well as in the new Elephant Lands habitat, the design of which he helped inspire.

"Tusko was extremely intelligent and very gentle with female elephants and the young ones," Lee said. "They loved spending time with him, and he loved hanging out with the whole herd, which is not always the case with adult male elephants."

In 2012, an Oregonian feature on Oregon Zoo inhabitants approaching the end of life highlighted the ways keepers and veterinary staff cared for the elderly Tusko:

"Watch him walk and you might notice the 13,000-pound elephant frequently shift weight to his left side, which must help alleviate aggravation to a decades-old right rear foot injury... Keepers give him ibuprofen to help with swelling, Tramadol for pain, and treat him to hydrotherapy sessions, which include warm-water soaks, sometimes with Epsom salt. They massage his joints with high-intensity spray. They also ensure that Tusko, Packy and the other elephants exercise daily and keep their weight down, which — as anyone who's old and stiff knows — helps."

Thanks to a dedicated zoo staff and this combination of exercise, therapy and medication, Tusko did well for many years. But according to zoo veterinarian Tim Storms, these types of injuries tend to worsen over time.

"Tusko compensated for the old injury by placing more weight on his other legs," Storms said. "Instead of 13,000 pounds being distributed evenly over four legs, it was distributed over three, which puts a tremendous amount of pressure on the other limbs. Eventually, that burden reaches a tipping point and becomes too much."

This past week Tusko developed severe swelling and decreased flexibility of his right front foot, Storms said, resulting in his no longer being able to bear weight on that limb. Keepers reported he was lying down more frequently, having great difficulty getting up, and using his trunk to help support his weight.

"It was obvious he was in a great deal of pain," Storms said. "It was distressing to watch him trying to walk, and we felt we had run out of treatment options."

Physical therapy techniques and anti-inflammatory medications, even at increased dosages, were no longer easing Tusko's discomfort, and not wanting him to suffer, management and staff made the difficult decision to humanely euthanize him.

Tusko was born in Thailand around 1971, brought to Miami by an exotic animal importer in the early 1970s, and eventually sold to the Central Florida Zoo. Originally known as Sobik, he became that zoo's first elephant, acquired by then director Jack Hanna and named after local restaurateur John Sobik Jr., who funded the purchase.

After several years, it became apparent the tiny Florida zoo was not adequately staffed to care for a rapidly growing bull elephant, and in 1978 Sobik was acquired by renowned animal trainer and circus performer Rex Williams. Williams renamed the elephant Tusko, featuring him in shows with Circus Vargas through most of the 1980s.

Tusko, as his name implied, did have impressive tusks at one time, though he broke both prior to coming to the Oregon Zoo. The remaining portion of his left tusk became chronically infected late in life, and in the spring of 2007, he underwent two surgeries to remove it. Not all Asian elephants have tusks, and the poaching of elephants for their ivory has resulted in the "tusk gene" becoming increasingly rare.