Sure, Punxsutawney Phil may be calling for an early spring, but more importantly for local residents, so is Velda, the Oregon Zoo's African pygmy hedgehog. Velda did not see her shadow this morning, meaning an early spring could be in store here in the Northwest as well.

"Hedgehogs are the real weather experts of the animal world," said zoo curator Michael Illig, who will oversee the zoo's Hedgehog Day festivities. "Punxsutawney Phil and his ilk are relative newcomers to the game. When European immigrants to the United States realized their new home didn't have hedgehogs, they turned to the groundhog out of necessity. But Velda is bringing the holiday back to its origins." 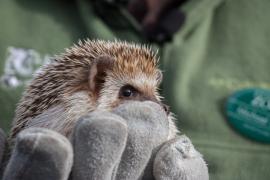 "The zoo's hedgehogs have fared slightly better than Punxsutawney Phil — which admittedly is not that great," Illig said. "Last year though, our hedgehog Whiskers J. did predict an early spring, which was definitely accurate for this region. We had the warmest winter on record."

According to records from StormFax Weather Almanac, Phil's predictions have been correct about 39 percent of the time. Oregon Zoo hedgehogs have been slightly more successful with a 45 percent accuracy rate.

Velda, one of five hedgehogs born at the zoo in 2014, is making her forecasting debut this year. Her name was selected by a zoo fan who bid on naming rights during a comedy night fundraiser that earned $28,000 for the Portland Audubon Society and the Tanzania-based Ruaha Carnivore Project.