Chloe, 46, the oldest of the zoo's four chimpanzees, has recently become the dominant member of her troop, signaling the others to keep away from food and enrichment items she wants. She quickly took charge of a GoPro placed inside the chimp habitat by keepers, and carried it around with her, chronicling the day's events. 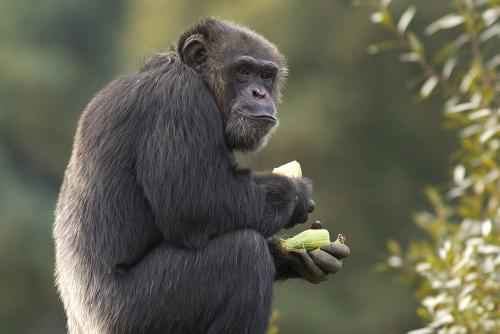 "Chloe immediately went to it and kind of showed us a 'day in the life of Chloe,'" said keeper Colleen Reed. "It was able to give us a really, really unique opportunity to see what she does during the day and what she actually enjoys. These behaviors are things that keepers see every day, but never before from this perspective."

No stranger to technology, Chloe had previously experimented with the camera function on iPads, extending her long, wrinkled fingers through a mesh barrier to touch a keeper-held screen, and toggling between the camera's selfie and outward-facing photo modes. Reed thinks the chimp may have been attempting to make a similar switch with the GoPro, seeking a selfie perspective.

"I knew she would be curious and kind of turn it around back and forth," Reed said. "What I didn't expect her to do necessarily was figure out how to turn it on and off."

Before joining the Oregon Zoo, Reed worked with Orangutan Outreach, and she continues to coordinate that nonprofit's Apps for Apes program, using iPads to provide stimulating enrichment for orangs and chimps. 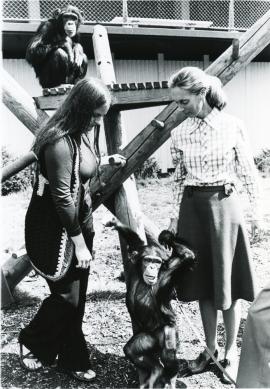 Keepers describe Chloe as a playful chimp who loves food, and food vocalizations are indeed heard in the video, which shows her gathering up and enjoying some ice treats.

"Just like people, if you're sitting in a restaurant and all of a sudden you hear somebody literally grunt, that's pretty much what chimps do too," Reed said. "They just get a little more excited about it."

Before coming to the zoo, Chloe had been kept as a pet, and had to learn to behave like a chimp in order to be accepted into the group. She continues to display some human characteristics such as eating daintily or flipping through a book very carefully and thoughtfully. She is distinguished from the other three Oregon Zoo chimps by her "spike-mullet" hairstyle and tendency to walk upright more often, another byproduct of living among humans.

Chloe was born around 1969 and donated to the Oregon Zoo on March 2, 1975. During this time, the zoo had a strong connection to renowned chimpanzee expert and conservationist Jane Goodall, who was instrumental in helping the zoo fund a large outdoor area to house all its chimps together. In 1979, Dr. Goodall and her husband, Derek Bryceson, director of the Tanzania National Parks, stopped by the zoo to visit Chloe and the other chimps.