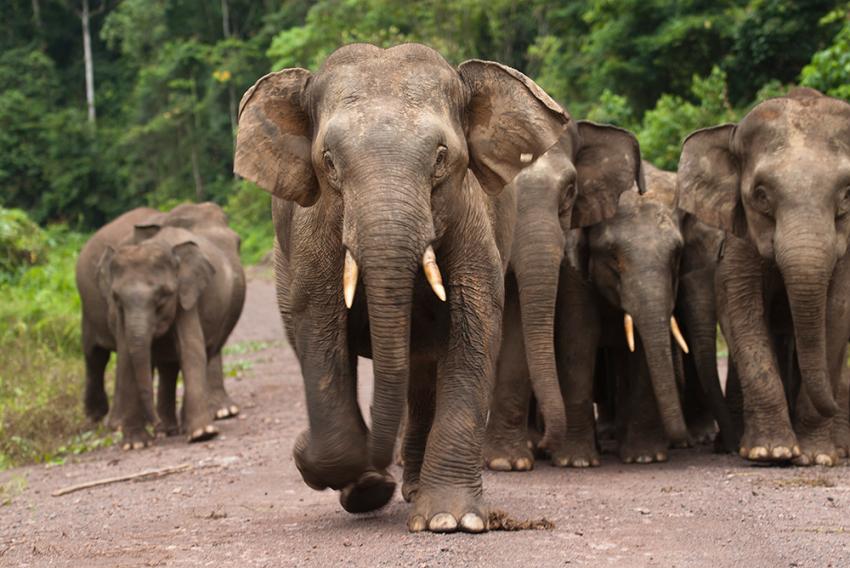 That's more or less the scenario facing the Sepilok Orangutan Rehabilitation Centre located in Sabah, one of two Malaysian states on the island of Borneo. The center, operated by the Sabah Wildlife Department, was established in 1964 to return orphaned apes back to the wild. Out of necessity, it is now helping Borneo elephants as well, which are even more endangered than orangutans.

As Borneo's native forests are cleared to grow crops, elephants are forced to graze in farms and palm oil plantations, sometimes with tragic results. Agricultural workers occasionally kill or injure elephants that raid their plantations, and the clashes can also separate calves from their herds.

The Oregon Zoo's own Chendra, the only Borneo elephant in North America, was orphaned this way, and in just the past three years, the Sabah Wildlife Department has rescued 15 baby elephants, each less than a year old. All of them were found wandering alone in known human-elephant conflict areas along the east coast of Sabah.

This month, the Sepilok center found itself caring for four new orphans, and wildlife officials have been scrambling to find an adequate supply of milk-replacer formula for the infant elephants.

"The situation here is quite dire," wrote Sen Nathan, a veterinarian and assistant director of the Sabah Wildlife Department, who reached out to Metro Council President Tom Hughes last week.

Hughes, who had visited Borneo in January and met several orphaned elephants while there, alerted Teri Dresler, general manager of Metro's visitor venues, who in turn notified Oregon Zoo director Don Moore. From there, the zoo team sprang into action, quickly sourcing a supplier that could ship Asian elephant milk replacer to Sabah.

"When I saw Dr. Nathan's email, I knew we had to help these orphans," Dr. Moore said. "Our zoo is dedicated to Asian elephants — they are at serious risk of extinction — and here are four individuals in desperate need of help. Ultimately, we need to slow the deforestation in Borneo, but there is something we can do for these orphaned elephant babies right now."

As an emergency stopgap measure, the zoo wired $1,000 to Sepilok straightaway — enough to buy a couple weeks' worth of the formula they've been using for the elephant babies. Meanwhile, zoo nutritionist Matt Brooks is arranging for 200-400 kilograms of powdered milk replacer (about $9,000 worth) to be sent to Sabah from Singapore in about two weeks. This supply should keep the four orphans nourished for about two months, buying some time for wildlife officials to secure additional food.

"I would sincerely like to call upon corporate bodies in Sabah or even throughout Malaysia that might have a genuine interest in assisting Sabah Wildlife Department to fund the daily care and feeding of these poor baby elephants," said William Baya, the department's director in a press release last month.

Through the Borneo Elephant Conservation Alliance — a partnership announced last month by the Oregon, Woodland Park and Houston zoos — the wildlife department is also hoping to quickly establish a Borneo Elephant Care Center, where orphaned babies can be cared for until they are at least 5 years old. The center would also develop a rehabilitation program aimed at preparing elephants for release back into their wild forest home whenever possible.

Money to purchase the elephant milk formula came from the Oregon Zoo Foundation's Endangered Species Justice Fund. The fund — established in 2007 by the zoo and the U.S. Attorney's Office in cooperation with the U.S. Fish and Wildlife Service — uses payments ordered by Oregon's federal court as part of wildlife-crime sentences to help endangered and threatened species.