On a sunny, windswept meadow atop Mount Hebo last week, Oregon Zoo conservationists released the last of the summer's zoo-reared Oregon silverspot butterflies in an attempt to boost the declining population of this imperiled Northwest beauty.

Listed as threatened under the U.S. Endangered Species Act, the Oregon silverspot was once common in coastal grasslands from northern California up into British Columbia, but has since vanished from all but five sites due to habitat loss and the disappearance of its host plant, the early blue violet. 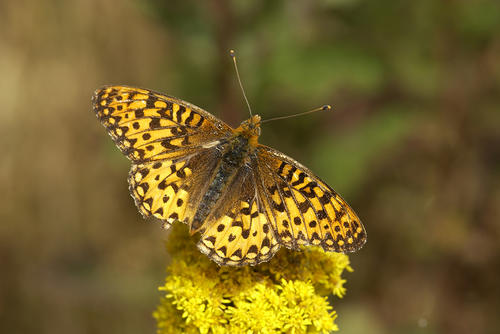 For the past month, the zoo and its conservation partners have been making weekly trips to the coast, transporting butterfly pupae to the grassy headlands and salt-spray meadows that make up some of the last remaining habitat for the silverspot. Nearly 450 Oregon Zoo-reared silverspots were released this summer at four field sites along the Oregon Coast.

At the field sites, the silverspots complete their metamorphosis in "pupae pockets" tucked inside mesh pens designed to keep out hungry predators like voles and white-crowned sparrows. Over the next few weeks, they will emerge as fully formed butterflies, launching themselves into the meadow to complete the release process.

"It was the perfect time of year to be out there, right in the middle of the flight season," said zoo conservation research associate Karen Lewis. "Adult silverspots were flying all around us and flitting across the meadows."

Silverspots need to get on with their lives quickly. With a life expectancy of about two weeks, the females have just enough time to mate, locate a patch of violets in which to lay their eggs, and complete their lives.

During last week's release, one of the newly emerged females fluttered straight to a nearby daisy and was joined there moments later by a male silverspot.

"Which, you know, is the whole point!" said ecologist Kaegan Scully-Engelmeyer, who manages the weekly releases and monitors the chrysalides in their release pens.

"The goal of the recovery program is to help each population grow large enough to be self-sustaining," Lewis said. "If it weren't for this program, three of the five remaining silverspot populations would likely be extinct."

The zoo's silverspot recovery effort began in 1998, but this year marks the first time the butterflies have been released at the U.S. Forest Service site atop Mount Hebo in Tillamook County.

Mount Hebo has long been one of the source sites for the recovery effort: Each year, female silverspots are collected from the area and brought to the zoo's butterfly conservation lab to lay eggs. The eggs hatch into tiny larvae (caterpillars), which are kept safe over the winter so they can grow in the spring and be released next summer along their coastal habitat, beginning the cycle anew.

But drought conditions over the past two years have caused an alarming decline in Mount Hebo's silverspot population. In dry heat, the silverspot's main host plant, the early blue violet, goes dormant before caterpillars can eat enough leaves to complete their development — meaning there are fewer adults to mate and replenish the population.

"Mount Hebo is where these pupae's parents originally came from," Lewis said. "Essentially, we're putting back what we took and adding quite a few more."

The Oregon Zoo works in partnership with the U.S. Fish and Wildlife Service, Woodland Park Zoo, Coffee Creek Correctional Facility and the Institute for Applied Ecology to rear butterflies and release them into the wild.