Nora, the young polar bear who has captivated much of the country since her birth at the Columbus Zoo last November, is thriving after her first week behind the scenes at the Oregon Zoo, animal-care experts report.

Columbus Zoo keeper Devon Sabo, who traveled to Portland to help Nora settle into her new home, says the young bear has been exploring, playing and showing a remarkably independent spirit.

"She has done better than I could have imagined."

"Nora and I have been here just short of a week now," Sabo said. "She has done better than I could have imagined, which is really great for me to see — tackling all her new adventures, playing with her toys, diving in her pool, getting to know the new keepers...."

The cub was particularly close with her Columbus Zoo team: Keepers took over her care after her mother began leaving her unattended in the den for prolonged periods of time. Nora weighed about 1 pound when they began raising her; she now weighs around 175.

Sabo, who helped with Nora's hand-rearing from the time the cub was 30 days old, bid a tearful goodbye to her young charge yesterday before catching an early flight back to Ohio this morning.

Keepers believe the Oregon Zoo's good-natured, 31-year-old Tasul is likely to befriend Nora, and can serve as a mentor to the juvenile bear as she grows into an adult. 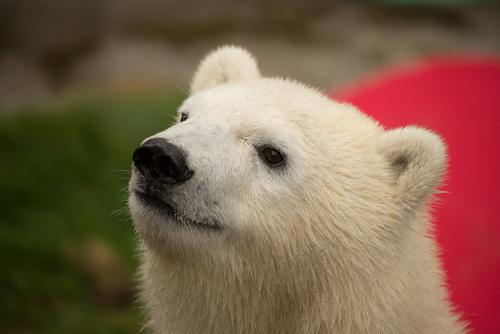 "The plan all along has been to get Nora with another bear, and we think that Tasul's going to be a great fit for her based on her demeanor," Sabo said.

The 10-month-old cub will meet Tasul after 30 days in quarantine — standard practice for animal health. While Nora will remain behind the scenes during her quarantine period, the zoo will provide regular updates to supporters in Oregon, Ohio and beyond. Oregon Zoo visitors should be able to see Nora in her new home some time in October.

"We have an amazing keeper team here, which has enabled our bears to participate in critical conservation science," said Oregon Zoo curator Amy Cutting, who oversees the marine life area. "We anticipate continuing that with Nora through some cooperative training, which the Columbus Zoo staff have already begun with her in order to provide the best possible care."

In 2011, Tasul became the first polar bear in the world to voluntarily give blood — a cooperative procedure that improves animal welfare, especially during veterinary treatment. After reading about this milestone in the news, Dr. Karyn Rode, a scientist with the U.S. Geological Survey's Polar Bear Team, contacted the zoo for assistance with the USGS's Changing Arctic Ecosystems research.

Since then, Tasul has helped Rode research how climate change is affecting the diets of wild polar bears and has helped the USGS in tackling another climate change mystery, by wearing a high-tech collar to track her movements. Polar bears are extremely difficult to observe in the wild, and Tasul's data is helping researchers develop methods to remotely investigate how these predators are responding to the retreat of sea ice.

"The scientists we collaborate with are interested in getting information from more than one bear, and the age difference between the two is a valuable contrast as we try to understand how sea-ice loss will affect polar bears during different stages of life," Cutting said. "Tasul is a geriatric bear, and Nora is quite young. It could be that we learn different things about polar bears from each of them."

Polar bears are threatened by climate change; they're designated as threatened under the U.S. Endangered Species Act, and they're on the World Conservation Union's Species Survival Commission's Red List identifying species at high risk of global extinction. If current climate warming trends are left unchecked, scientists predict wild polar bear populations will decline by up to two-thirds by 2050.