The Oregon Zoo drew praise from colleagues at zoos and aquariums across the continent this month, earning another prestigious award from the Association of Zoos and Aquariums — its seventh such honor over the past five years. The award was announced Saturday at AZA's annual conference, held this year in San Diego. 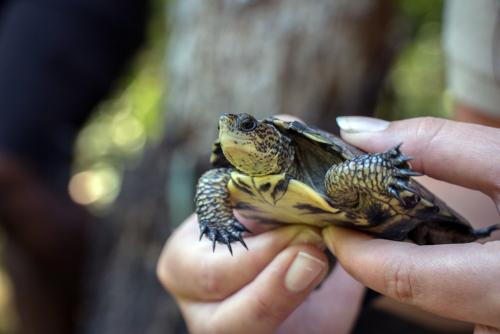 In 1990, only two pond turtle sites were left in Washington. Today, six populations have been established with two in Puget Sound and four in the Columbia River Gorge. More than 1,800 turtles have been head-started and released to these sites. Studies have revealed that an estimated 95 percent of turtles released in the Columbia River Gorge survived their first year.

"We are deeply honored," said Dr. Don Moore, Oregon Zoo director. "These awards are the highest distinction in the zoo community. They represent the respect shown for the Oregon Zoo by our peers from around the world."

Since 2012, the Oregon Zoo has been recognized with seven of the association's major annual awards: four for conservation work on behalf of imperiled Northwest species, one for environmental efforts in the zoo's day-to-day operations, and two for marketing excellence.

"Earning that many awards over the span of five years is quite an accomplishment," said AZA interim president and CEO Kris Vehrs. "Oregonians can be very proud of their zoo — it's one of the top zoos in North America."

AZA's Saving Animals From Extinction effort combines the power of engaging 183 million annual AZA-accredited zoo and aquarium visitors with the collective expertise of these facilities and their conservation partners to save signature species, including the western pond turtle.