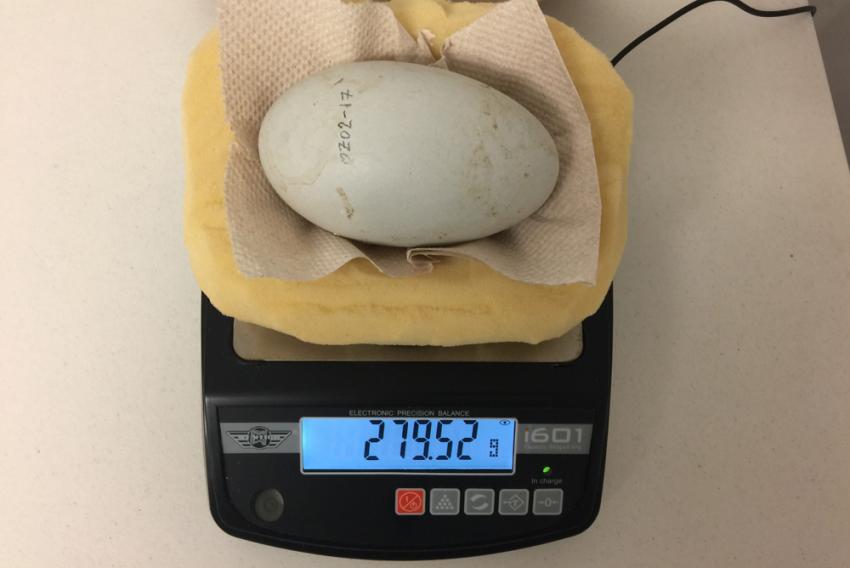 Season begins with three eggs and an egg-ceptionally helpful father

California condors at the Oregon Zoo's Jonsson Center for Wildlife Conservation are laying the groundwork for species recovery one egg at a time. The first three eggs of the 2017 breeding season arrived at the center over the past week, and keepers hope to see several more.

Keepers also observed that the father of one of the eggs — known only by his identification number, 421 — has proven to be an unexpectedly helpful parent, despite being a first-timer.

"The first time he saw the egg, he was very gentle and immediately started incubating," said Kelli Walker, the zoo's lead condor keeper. "We'll have to see how he reacts when the chick hatches, but so far he's been an exceptional dad, and has been doing most of the incubating. He gets a gold star."

Condor #421 was hatched at the Los Angeles Zoo, and came to the Oregon Zoo after two unsuccessful attempts to release him in the wild. This is also the first egg for his mate, #357.

"Each new egg is critical to the California condor's comeback," Walker said.

The California condor was one of the original animals included on the 1973 Endangered Species Act and is classified as critically endangered. In 1982, only 22 individuals remained in the wild and by 1987, the last condors were taken into captivity in an attempt to save the species from extinction. Thanks to breeding programs like the Oregon Zoo's, condor numbers now total more than 400, with the majority of those flying free.

Since 2003, 61 chicks have hatched at the Jonsson Center, and 47 Oregon Zoo-reared birds have gone out to field pens for release. In addition, several eggs laid by Oregon Zoo condors have been placed in wild nests to hatch. Zoo staff hope the 2017 breeding season will provide another boost to those totals.

Walker expects three or four more eggs will be laid this year, and the conservation center should see its first chick of the season in late March or early April.