Tilly's otter pups are growing fast and ready for names 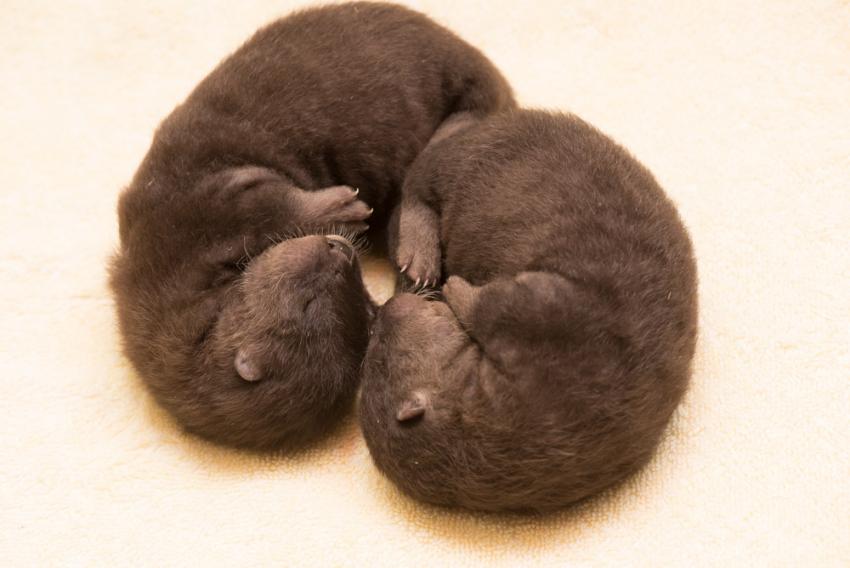 Tilly's pups are on the move — sort of. The 4-week-old river otters at the Oregon Zoo, one female and one male, now weigh about 2 pounds each and have begun taking their first tentative steps. The next step, keepers say, is to give them names.

"The little ones haven't opened their eyes yet, but they're growing fast and getting more mobile," said Julie Christie, senior keeper for the zoo's North America section. "They usually don't travel too far when their eyes are closed. We think it's time to name them before they really start to roam around."

Christie and the other keepers have come up with a short list of possible names for each pup and are inviting the public to weigh in here. Votes will be accepted through Wednesday, April 5, and the zoo will announce the winning names on Thursday, April 6.

"For river otters, we like to choose names based on local waterways," Christie said. "River otters are sensitive to water pollution, but we're fortunate to live in a region that supports a healthy otter population. We want these pups' names to highlight the importance of protecting our rivers, streams and wetlands."

For the female pup, keepers are considering the following names (and nicknames):

For the male pup, keepers have narrowed it down to the following:

"She was a tough little otter," remembered curator Amy Cutting, who oversees the zoo's North America section. "She was in really bad shape when she was found, so it's great to see her doing well now and raising pups of her own. She's been a terrific mom."

Christie said Tilly has started making some other den areas in her behind-the-scenes area, and she continues to take some "mom time" when she needs a break.

The pup's father, B.C. (short for Buttercup), also had a rough start to life. Orphaned near Star City, Ark., in 2009, he was initially taken in by the Little Rock Zoo. He was transferred to the Oregon Zoo the following year, and he and Tilly have been playful visitor favorites ever since. Because both adult otters were born in the wild, they are considered genetically important for the breeding otter population in North American zoos.

Once threatened by fur trappers, North American river otters are now considered rare throughout most of the U.S. due to habitat destruction and water pollution. They are relatively abundant in healthy river systems of the Pacific Northwest though, and are frequently observed in local waterways.

Metro, the regional government that manages the Oregon Zoo, has preserved and restored more than 90 miles of river and stream banks through its voter-supported natural area programs. By protecting water quality and habitat, these programs aim to provide the healthy ecosystems needed for otters, fish and other wildlife to thrive.