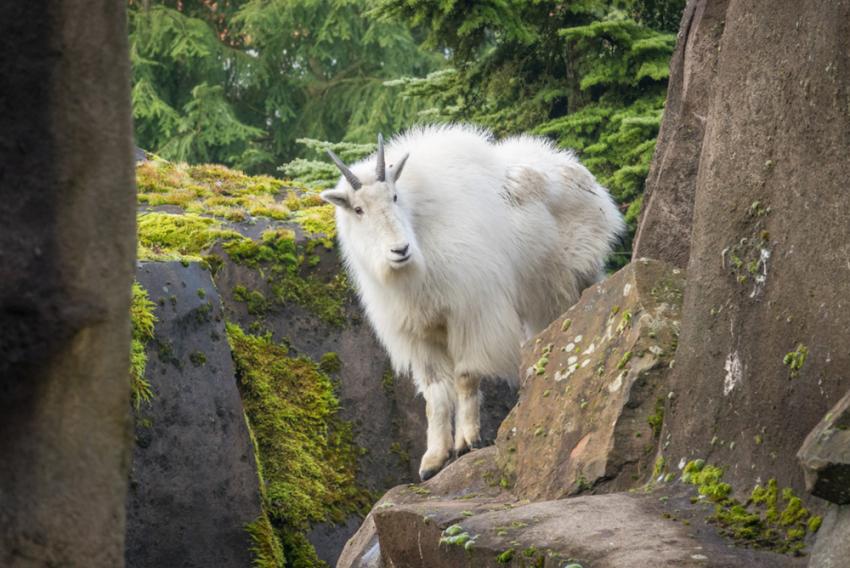 Sassy, a young mountain goat nanny from Calgary, Alberta, has joined the Oregon Zoo family, spending much of the past two weeks with male mountain goat Honovi in their rocky Cascade Crest habitat near the zoo's entrance.

Since making her Portland debut Feb. 19, the active and inquisitive Sassy has been the first animal many people encounter when visiting the zoo.

"She's exploring every nook and cranny," said Julie Christie, senior keeper for the North America section. "She climbed up on all the rocks and quickly got used to the terrain. We had some snow up here yesterday morning, and she seemed to like that too."

Mountain goats are known for their amazing climbing and balancing abilities. In the Pacific Northwest, wild mountain goats can be seen on various peaks in the Washington Cascades and Olympic Peninsula, and across Oregon ranges like the Elkhorns and Wallowas.

Sassy was born May 28, 2015, at the Calgary Zoo. Caregivers will begin introducing her to the zoo's other female mountain goat, Montane, once she is completely comfortable in her new home.

"Sassy's definitely living up to her name," Christie said. "She's got some spunk. She's younger than the other two mountain goats here, and she continues to surprise us with her energy and curiosity."

The male mountain goat, Honovi, has been shy around both females so far, but caregivers hope they eventually will produce offspring, adding to the population of this iconic Northwest species. Fewer than 10 AZA-accredited zoos currently house mountain goats.

Honovi was born at the Cheyenne Mountain Zoo in May 2010, and came to Portland in 2015 as a companion for Montane. Montane, who moved here in 2009, was an orphan rescued by Idaho wildlife officials.