Last call for Nora: fans can see her through Sept. 10 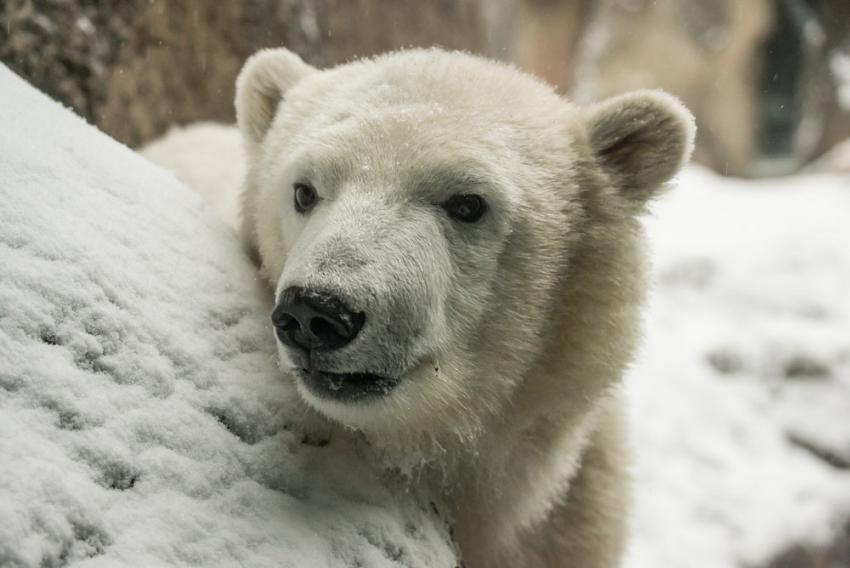 She's made a big splash since moving to Portland last fall, but it’s time to bid Nora the polar bear a fond Rose City farewell. The last day to see her at the Oregon Zoo will be Sunday, Sept. 10.

“It’s been so rewarding to watch Nora grow over the past year,” said curator Amy Cutting, who oversees the Oregon Zoo’s marine life area. “She’s made a lot of progress and inspired a lot of people here in the Northwest and, through social media, all around the world. We hope everyone has a chance to come see her before she embarks on this important next step in her life.”

After Sept. 10, Nora will be moving to Utah’s Hogle Zoo, where caregivers plan to introduce her to Hope, who is moving from the Toledo Zoo and is about the same age.

“As hard as it is for us to say goodbye, this is a great move for Nora and we are really excited for her,” Cutting said. “For a young bear that was hand-raised, the companionship of another bear will be so important for developing social skills.”

Nora was born Nov. 6, 2015, at the Columbus Zoo and Aquarium. When her mother began leaving her unattended in the den for prolonged periods of time, Columbus caregivers made the difficult decision to step in and hand-rear the tiny cub, feeding her from a bottle until she was old enough to eat on her own. She came to the Oregon Zoo in September 2016, briefly spending time with the geriatric Tasul, who caregivers hoped would be a mentor to the young bear. But Tasul, one of the oldest polar bears on the planet, died before the two could form a strong bond.

“From the time she was a week old, Nora has interacted almost exclusively with people,” Cutting said. “Hope should be a great companion for her. The two bears were born less than a month apart, and they have a similar youthful energy.”

Hope was born at the Toledo Zoo on Dec. 3, 2015. The Association of Zoos and Aquariums’ Species Survival Plan for polar bears recommended her transfer this fall. The SSP prioritizes putting young animals together at the point where they are mature enough to leave their mothers. In the wild, young bears separate from their mothers around age 2 and may band together to survive the harsh conditions in the Arctic.

“While we would love to welcome Hope to Portland, the timing’s not right since we’re gearing up for construction of our new Polar Passage habitat,” Cutting said. “But Hogle Zoo has a terrific modern polar bear habitat and an expert animal-care team. It will be a great place for these two young bears to get acquainted.”

Hogle’s state-of-the-art Rocky Shores habitat mimics the Pacific coastline and is home to seals, sea lions and other marine species. Its polar bear area includes a 135,000-gallon saltwater pool that can be chilled to the perfect Arctic temperature.

According to Cutting, staff from Hogle Zoo have already spent some time with Nora in Portland to learn about her personality and routines, and Nora’s Oregon Zoo caregivers will travel with her to Utah to help her settle in. Veterinarians at the two facilities have also been in close contact to discuss some of Nora’s special needs. Hogle Zoo staff are highly trained and experienced polar bear vets, Cutting said, and the teams have been working on a seamless transition of her medical care as well.

“The polar bear community is tight-knit,” she said. “We all work together on easing transitions when bears move, and we share best practices for polar bear care.”

Meanwhile, the Oregon Zoo is preparing to break ground on its new polar bear habitat, Polar Passage, expected to open in 2020. The new space will provide bears with larger, more open terrain that they can patrol as they do in the wild. Polar Passage is one of eight major projects made possible by the community-supported zoo bond measure passed in 2008. With five of these projects now complete, the final three — improved habitats for primates, rhinos and polar bears — will be managed as a single construction project to save costs and increase efficiency.

It is too soon to say whether Nora might return to Portland once Polar Passage is complete, Cutting says.

“We’ll be ready to do whatever we are asked to do to help individual polar bears, the overall zoo population and polar bears in the Arctic,” she said. “There are a lot of variables, so we’ll wait and see what the SSP recommendation is when the time comes.  Our commitment to conservation-science collaborations will help inform that decision.”

The zoo is working with Polar Bears International, the U.S. Geological Survey and other partners on projects that will shed new light on the effects of climate change on polar bears in the Arctic. In 2011, Tasul became the first polar bear in the world to voluntarily give blood samples — a significant advance that improves animal welfare, especially during veterinary treatment. After reading about this milestone in The Oregonian, Dr. Karyn Rode, a scientist with the USGS Polar Bear Team, contacted the zoo for assistance with the USGS’s Changing Arctic Ecosystems research. Since then, Oregon Zoo bears have helped Rode research how climate change is affecting the diets of wild polar bears and helped the USGS develop methods to remotely investigate how these predators are responding to the retreat of sea ice.

Global warming is melting the Arctic sea ice polar bears call home, and with it, access to the food and shelter necessary for the species’ survival. The polar bear is designated as threatened under the U.S. Endangered Species Act, and the International Union for the Conservation of Nature’s Species Survival Commission has designated the species as facing a high risk of global extinction. People can help protect polar bears and other threatened wildlife through Small Actions, an easy-to-use online tool launched by the Oregon Zoo that empowers everyone to become a wildlife defender: oregonzoo.org/help-polar-bears.