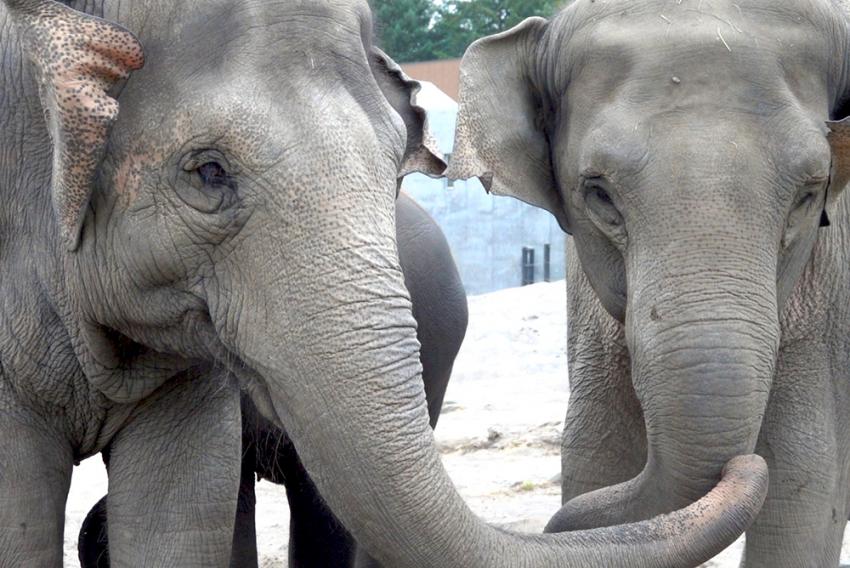 An innovative drug-delivery system developed for an 8,000-pound pachyderm could be an animal-welfare boon for species of all sizes, according to experts at the Oregon Zoo.

The zoo's animal-care staff presented the new technique to colleagues from around the country this week at the annual Elephant Managers Association conference, held in Columbus, Ohio.

As anyone who's had a sick pet knows, getting animals to take medicine can be quite a challenge — and this definitely held true for Sung-Surin, a 34-year-old Asian elephant at the zoo. Earlier this year, she was prescribed erythromycin, a particularly bitter-tasting powder.

"I tried it myself, and it was like the worst kind of chalk in the back of your throat," said Bob Lee, the zoo's elephant curator. "And after a half hour it was even worse than that."

Despite their close relationship with Sung-Surin — whose name is Thai for "sunshine" and often is simply called Shine — Lee and his team knew getting those meds into her wouldn't be easy. They began exploring ways to mask the taste, practicing first with vitamin C pills before starting her on the real regimen.

"We'd have her chug the pills down with a big jug of Gatorade," Lee said. "Or we'd wrap them up in thin paper towels."

These techniques worked fine with the practice vitamins — and the actual medication went down fine for a couple of days as well. But by the third or fourth day, Shine would refuse to take them.

Finally caregivers hit upon a solution. By rewarding her with some of her favorite treats, keepers taught Shine to swallow large gelatin capsules that had been filled and coated with coconut oil, then frozen. They tried out different sizes, eventually settling on an 18-milliliter capsule used for horses, which Lee describes as "about as big as a fun-size Snickers."

Once the swallowing behavior had been reliably established, caregivers added Shine's meds to the mix, concealing them inside a layer of coconut oil within the capsule. By the time the frozen oil dissolved, the antibiotics were well past Shine's taste buds and making their way through her system to fight the infection.

Shine and the herd

The breakthrough has been huge for Shine, who received an all-clear to rejoin the rest of the herd last month. (She'd been living apart from the other elephants since being diagnosed with tuberculosis in April.)

But there's a broader importance too, Lee says: Getting animals to swallow pills is a technique that can be trained to all kinds of species. Plus, a tried-and-true method allows animal-care staff to treat illnesses more quickly and efficiently.

"I don't know whether most people will understand how significant this is," Lee said. We've been training all the other elephants with blanks now, so if they ever were to get sick, we could slip their medications into the capsules and begin treatment right away. It's a huge deal for animal welfare."

In developing the new technique, the Oregon Zoo team consulted and collaborated with other elephant professionals.

"We couldn't have done this without drawing on the experience of our colleagues," Lee said.

The Oregon Zoo is recognized worldwide for its Asian elephant program, which has spanned more than 60 years. Considered highly endangered in their native range, Asian elephants are threatened by habitat loss, conflict with humans and disease. It is estimated that just 40,000 to 50,000 elephants remain in fragmented populations from India to Borneo. The zoo supports a broad range of efforts to help wild elephants, and has established a $1 million endowment fund supporting Asian elephant conservation.