Orphaned otter pup, rescued in California this fall, will be named Lincoln

The orphaned sea otter that was given a home at the Oregon Zoo this month is no longer just a number. Known previously as "805" — the number assigned to him by Monterey Bay Aquarium's rescue and care program — the fluffy, squeaky pup will now be called Lincoln, a name selected by his new caregivers.

"The name is intended to draw attention to the fact that sea otters were once found off the Oregon coast in places like Lincoln City," said Amy Cutting, who oversees the zoo's marine life area. "There is even a coastal area in Lincoln County known as Otter Rock."

The species was hunted to extinction along the Oregon coast in the early 1900s and has not established permanent residence in the state for more than a century. A few visiting otters have been sighted in recent years, notably in Depoe Bay in 2009.

"We hope they'll return someday as the otter population expands in Washington or heads north from California," Cutting said. "That would require protections, expansion of kelp forest habitat and reduction of toxins and waste in our waterways." 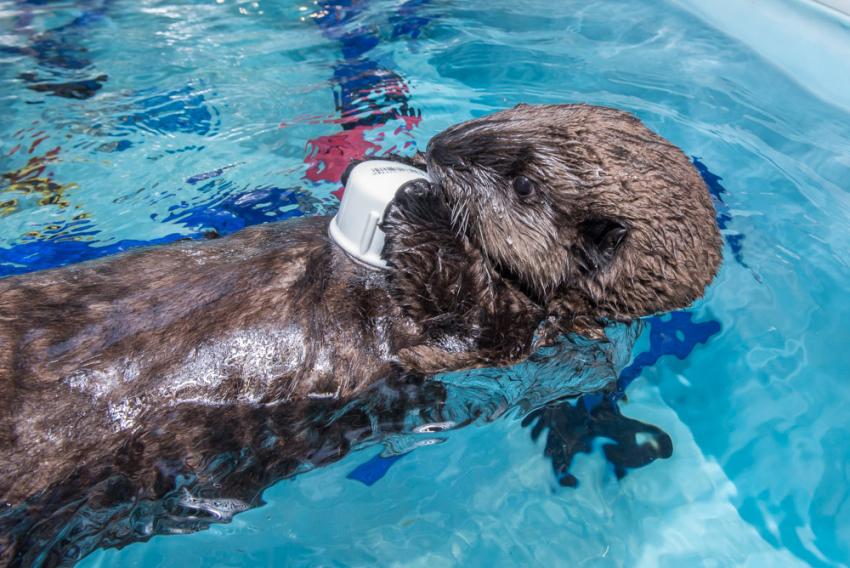 Cutting says Lincoln — estimated to be about 9 weeks old — continues to do well in his new home at the zoo, and visitors should get their first look at the young pup in the next month or two, when he joins the zoo's adult sea otters, Eddie and Juno, at Steller Cove. Lincoln is being cared for in a behind-the-scenes nursery at the zoo's Steller Cove marine life habitat. This separate enclosure was funded by the Sea Otter Foundation and Trust to enable the zoo to step up and welcome an orphaned otter pup when needed.

The tiny pup, rescued in late October, was stranded in Morro Bay Harbor when he was less than 2 weeks old. Unable to be paired with a surrogate mom, he was eventually deemed non-releasable by the U.S. Fish and Wildlife Service.

Sea otters are considered a keystone species and a play critical role in the Pacific Coast marine ecosystem, promoting healthy kelp forests, which in turn support thousands of organisms. Though currently protected from hunting by the Marine Mammal Protection Act of 1972 and the Endangered Species Act of 1973, sea otters continue to be threatened by oil spills, fishing nets and infectious diseases.

"Thanks to long-time Oregon Zoo member and otter enthusiast, Katie Hanson, nearly half of the rescue transportation and neo-natal care costs have been covered through the generosity of donors," said Julie Fitzgerald, executive director of the Oregon Zoo Foundation. "Katie heard about the impending rescue and rallied her friends to support the whole project. And the gifts are still coming in."