Orphaned otter, rescued in California this fall, is settling in at zoo's Steller Cove habitat

A small but boisterous sea otter pup, orphaned several weeks ago along the California coast, has taken up residence at the Oregon Zoo this month.

For now known simply as "805" — the number assigned to him by Monterey Bay Aquarium's rescue and care program — the young otter arrived in Portland Friday morning and is being cared for in a behind-the-scenes nursery at the zoo's Steller Cove marine life habitat. This separate enclosure was funded by the Sea Otter Foundation and Trust to enable the zoo to step up and welcome an orphaned otter pup when needed. 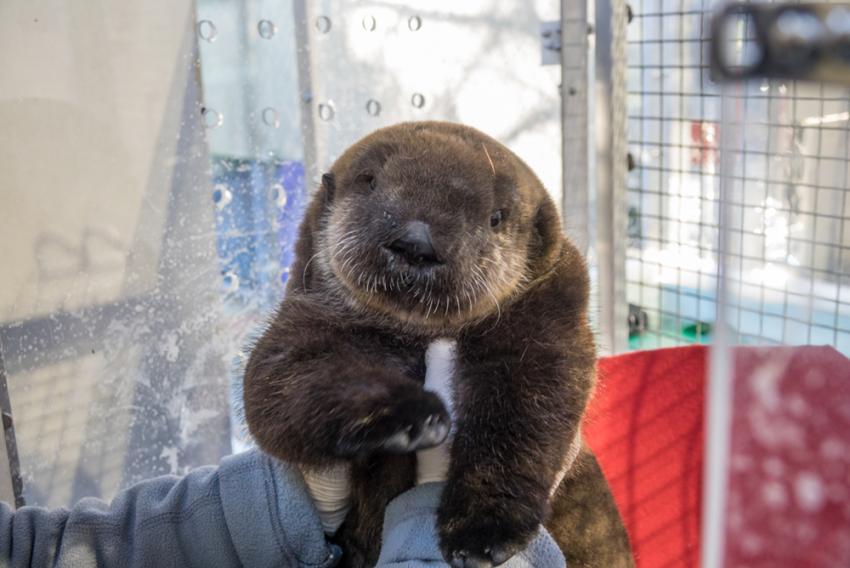 The tiny pup, rescued in late October, was stranded in Morro Bay Harbor when he was less than 2 weeks old. Unable to be paired with a surrogate mom, he was eventually deemed non-releasable by the U.S. Fish and Wildlife Service.

No. 805 is currently estimated to be about 2 months old, and weighs around 14 pounds.

"When they're young they float like corks, but he's learning to dive now and loves showing off," said Oregon Zoo marine life keeper Sara Morgan, who traveled to Monterey last week to meet the pup and help prepare for his trip north. "He's full of spunk, very squeaky and fun to be around. He also takes a lot of naps — that's when he's at his fluffiest."

Caregivers say the young otter has started grooming himself though he still needs some help, and he is enjoying his seafood diet — both good signs that he's settling in well.

"Right now he definitely has a preference for shrimp," Morgan said. "He seemed insulted when I tried to offer him squid."

Visitors should get their first look at the young pup next month, when he joins the zoo's adult sea otters, Eddie and Juno, at Steller Cove.

Sea otters, once abundant along the Oregon coast, were hunted to extinction here in the early 1900s and have not established permanent residence in the state for more than a century. A few visiting otters have been sighted in recent years, notably in Depoe Bay in 2009. Though currently protected from hunting by the Marine Mammal Protection Act of 1972 and the Endangered Species Act of 1973, they continue to be threatened by oil spills, fishing nets and infectious diseases.