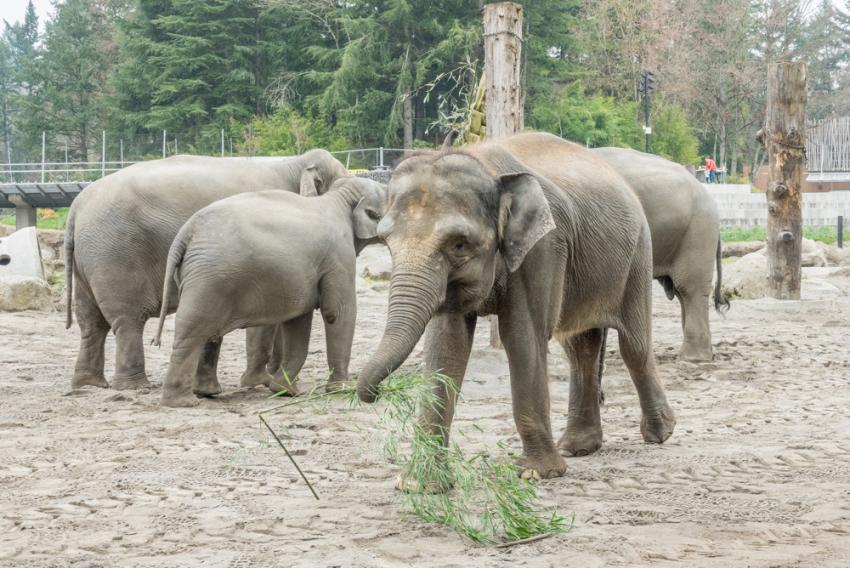 The worldviews of animal and wildlife advocates are as varied as their chosen causes, from animal rights to habitat conservation. Some groups are firmly anti-zoo, and though this perspective is at odds with our mission, we share their passion for the well-being of animals.

But misinformation doesn’t help anyone — and, what’s worse, it distracts from the real issues facing wildlife.

Recently, the group Care2 purchased a billboard near Portland using rescued elephant Chendra as the face of an anti-zoo campaign. This campaign and the troubling tactics used to promote it are based on false and misleading information.

Care2 crowd-funded this billboard by exploiting the emotions of well-meaning people — many of whom undoubtedly had never heard of Chendra, let alone visited the Oregon Zoo’s world-class elephant home. Its purported goal is to “free Chendra,” which makes for a catchy rallying cry but ignores the fact that Chendra has a family and a home where she receives an extraordinary level of care. To “free” her would not only be life-threatening but would mean separating her from her home, her family and her devoted caregivers.

Chendra was separated from her mother as a result of conflict with people near a palm oil plantation in Sabah, Malaysia — a tragically common occurrence even to this day. She had suffered a gunshot wound that left her blind in one eye. After wildlife officials determined she would not survive in the wild, they found her a home at our zoo in 1999, where she has played an important role in the elephant family, including helping to raise calves Lily and Samudra. She is a healthy, vital member of her herd and inspires our community to take action for elephants around the world.

The clearly misleading allegation that “Chendra is suffering and needs to be sent to a sanctuary immediately” is not based in fact and instead appears to be part of a larger anti-zoo agenda. Care2 regularly publishes anti-zoo materials, and the group behind this effort, which calls itself Free the Oregon Zoo Elephants, is also on the record as being anti-zoo.

Lacking any compelling facts to bolster the campaign, its authors have attempted to mislead the public with claims that the Oregon Zoo abuses elephants with a “bullhook.” Animal-care professionals refer to this tool as a guide, and it is most often used for training in situations where there is free contact between elephants and humans. That is not the case at Elephant Lands, however, where there is a barrier between the elephants and keepers. Caregivers rely on verbal communication and positive reinforcement — not the use of guides — in their daily care and training sessions.

Animal wellness is and always will be our No. 1 priority, and Elephant Lands, our elephants' community-funded home, was built with that commitment in mind.

The authors of this campaign did get one thing right: These are troubling times for elephants. Worldwide, all elephant species are facing unprecedented threats from poaching and shrinking habitat. That’s why we set up a $1 million Asian elephant endowment in 2016 and are working with partners in Borneo to stop the conflict that left Chendra without a home. Among other things, we are funding salaries for two elephant rangers with the Sabah Wildlife Rescue Unit and supporting the work of Dr. Farina Othman, Sabah’s top elephant scientist, who is focused on reducing human-elephant conflict.

As animal advocates, we need to stand together and focus on real change. When we start bending truths to further special agendas — or worse, spread misinformation that could hurt animals — we only make it more difficult to take action for elephants around the world.