First condor chick of season arrives with a surprise bonus

The first California condor chick of 2021 arrived in spectacular and surprising fashion this week at the Oregon Zoo's Jonsson Center for Wildlife Conservation, kicking off what looks to be an exceptional year in the effort to save this critically endangered species.

The fuzzy new arrival hatched on March 13 to condor parents No. 765 and No. 55, who had produced the first egg of 2021 back on Jan. 15 — that much was expected. But when keepers got their first glimpse of the chick, they noticed something else in the nest box beside it: a second egg.

"That was very surprising," said Dr. Kelly Flaminio, who oversees the zoo's condor recovery efforts. "Condors typically lay only one egg a year — as far as we know, this has never happened before." 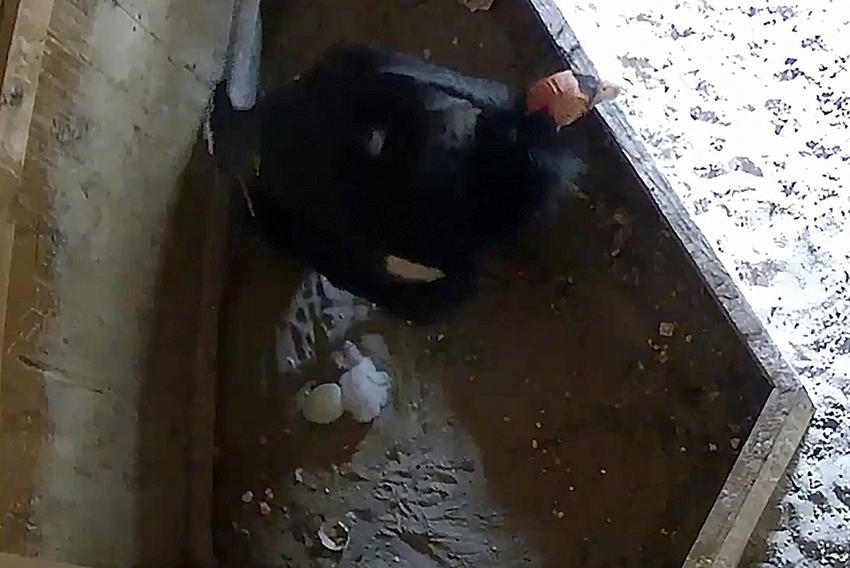 In certain cases, Flaminio noted, keepers will remove an egg from the nest box early in the season, thus encouraging a particular condor to lay a second time. The process, known as "double clutching," has helped increase condor numbers and improve genetic diversity in the population since the recovery program began.

That's not what happened this time though, according to Flaminio.

"Apparently, No. 765 double-clutched herself," she said. "She laid a second egg right as her first one was hatching. We've never seen anything like it."

So far, the new parents are doing a fine job caring for both egg and chick, though keepers may eventually transfer the egg to hatch under another condor pair and be foster-raised.

Since mid-January, condors at the Jonsson Center have been laying the groundwork for species recovery one egg at a time. In addition to the new hatchling, 11 other eggs have been laid this year (with five confirmed to be fertile) and at least one more is expected soon. To aid in the zoo's recovery efforts, FLIR visible security cameras are providing improved views into nesting areas, helping staff better monitor the health of chicks and parents.

Recent upgrades and new equipment at the Jonsson Center were made possible through a grant from the Avangrid Foundation and support from the Oregon Zoo Foundation's $8.5 million Heart of the Oregon Zoo campaign. To learn more or to make a gift, call 503-220-2493 or email foundation@oregonzoo.org.

More than 70 chicks have hatched at the Jonsson Center since 2003, and more than 50 Oregon Zoo-reared birds have gone out to field pens for release. Several eggs laid by Oregon Zoo condors have been placed in wild nests to hatch. California condor breeding programs are also operated at San Diego Zoo's Wild Animal Park, the Los Angeles Zoo and the Peregrine Fund's World Center for Birds of Prey in Idaho.