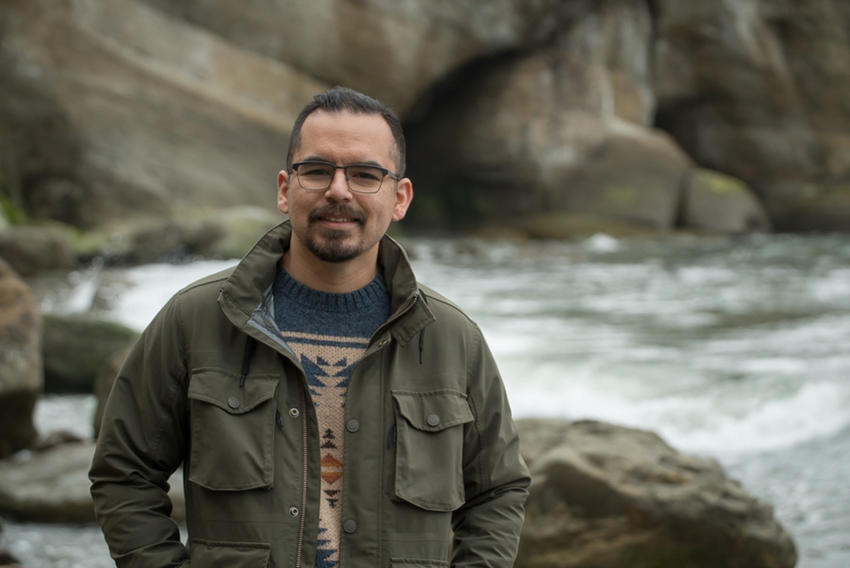 For thousands of years, sea otters played an important role in the cultures of Oregon's coastal people. We spoke with Siletz tribal member Peter Hatch about his ancestors' connection to sea otters, the forces that drove them to extinction and a tribal-led effort to bring them back.

Oregon Zoo: What does tribal history tell us about the relationship between Oregon's coastal people and sea otters?

Peter Hatch: Our people have shared our waters with sea otters for longer than I know to say, and it's really just in the last few generations that they've been gone. In the different languages and dialects up and down the Oregon Coast, there are at least six different words for sea otter that I've come across. Near what we now call Cape Foulweather is a place that has always been known to local Tillamook people as əs·hí·higəl ʃə́·nʃis (us-HII-hi-gul SHUN-shis), which just means "otter rock," and today is known in English as Otter Rock Marine Reserve. Down south, just a little bit this side of the mouth of the Rogue River is a rocky point of land that Dene people have always known as xvlh-t'vsh see (XUTL-tush sae), which again just means "sea otter rock." Today, it's still known in English as Otter Point.

Many stories from our ancestors, talk about a time when the boundaries between what we now think of as the "human world" and the "animal world" were a lot more fluid. There's an old story about a young Coos woman who married into the sea otter people and went to live out to sea — and established a connection between us human people and the sea otter people that carries down through the generations. And that relationship benefits both of us.

In short, sea otters are part of the web of interconnections that we have always relied upon for our prosperity. They are a missing but cherished part of the fabric that makes the Oregon Coast our home.

OZ: How do these traditional understandings intersect with modern ecology?

Fundamentally, a lot of these beliefs and understandings boil down to trying to instill an appreciation for this place where we're lucky enough to live, and the resources that sustain us. We inherit an ecosystem that's out of balance in large part because of the absence of one particular animal, the sea otter. By eating sea urchins and keeping them in check, otters help our kelp forests thrive. In my view at least, modern ecology has been catching up to those ancestral understandings and trying to methodically and scientifically map those interconnections that people who've lived in this place have always known are there.

OZ: When did sea otters go extinct in Oregon? And why?

P: Oregon is just a part of the broader story of the North Pacific, where sea otters were very nearly hunted to extinction for the commercial fur trade, from the 1740s onward. Compared to the time they've been with us, Oregon's sea otter population disappeared in almost the blink of an eye. The last Oregon sea otter that we know of was killed around 1910 – just a year before sea otters were protected by the North Pacific Fur Seal Treaty.

The slaughter of Oregon's sea otters occurred in parallel with the catastrophes that were affecting the Indigenous peoples of Oregon in the 19th century. Between the wars, the disease, the loss of land, the loss of life, the boarding schools and termination policy, and just the pure stigma around being Indian, it's a very real possibility that Oregon's tribes could have been wiped out completely. Despite it all, we survived and Oregon's sea otters didn't — and that relationship was broken.

OZ: What was your own family's experience of these struggles and tragedies?

P: Sometimes we treat this very near history as ancient, but these historical forces shape who our families are — and how many of us there are — even to this day. My great-grandmother Hattie was the only survivor among nine brothers and sisters, and was sent as an orphan to Chemawa Indian school in Salem. My grandfather, Ken Hatch, grew up around people who had been there at the signing of the treaties in the 1850s. In 1954, the Western Oregon Termination Act basically nullified our tribal government, and so my dad's generation grew up as members of a tribe that in the eyes of the government no longer existed. I've been very lucky to always have been raised with a sense of Native identity. People of my father's generation worked very hard to throw off the shame and the stigma around being Indian that attached to so many people of prior generations.

OZ: Your late father, Dave Hatch, started this movement. How did it come about?

P: Back in the late '90s, my dad was just looking for a name for a small boat that we'd built together, and in a Chinook dictionary he happened across the term Elakha for sea otter. His simple search for a name sparked his interest in sea otters — and raised questions about why they were absent, whether it mattered, what could be done. As he read and started to put pieces together, he started to see that broken relationship, and how much we — and not just tribal folks but all Oregonians — stood to gain by restoring sea otters to our ocean. That led down a path of research and activism and connecting people that formed the Elakha Alliance. I think he would be really heartened by the progress we've made, and by the real prospect that we won't go another generation without sea otters on the Oregon Coast.

OZ: With all of the challenges ahead, what gives you hope?

We have a tremendous effort ahead, and many people need to be at the table as decisions are made, but there's hope here, there's potential here. And many people who have heard about this project have met us with tremendous good spirit and have offered their help and their expertise as we move forward. Sadly, much of the vital, worthy environmental work going on is about grasping for what little we have left. This project is the chance to do something proactive — trying to restore something that we've lost, and thereby create a better future. When I look forward to the day that we can have a wild, self-sustaining sea otter population in Oregon again, I'm taken right back to that old story that we started with — the idea that we're not just restoring a species, we're bringing back a relative.