Zoo mourns loss of Mochica, one of world's oldest penguins

The Oregon Zoo bid a sad farewell over the weekend to Mochica, elder statesman of the Humboldt penguin colony and a distinguished seabird ambassador for more than three decades. At 31 years old, he was one of the oldest — and best loved — penguins on the planet.

"Mochica was the oldest male of his species in any North American zoo or aquarium, maybe the whole world," said Travis Koons, who oversees the zoo's bird populations. "His remarkable longevity says a lot about both his zest for life and the quality of care he received over the years."

Mochica hatched July 6, 1990, at the Oregon Zoo and was hand-reared, a standard practice at the time. But Mo, as he was known for short, grew up different from the other chicks. More than any penguin in the zoo's large Humboldt colony, he enjoyed spending time with people, often choosing keepers' quarters over the company of his fellow birds in the Penguinarium. 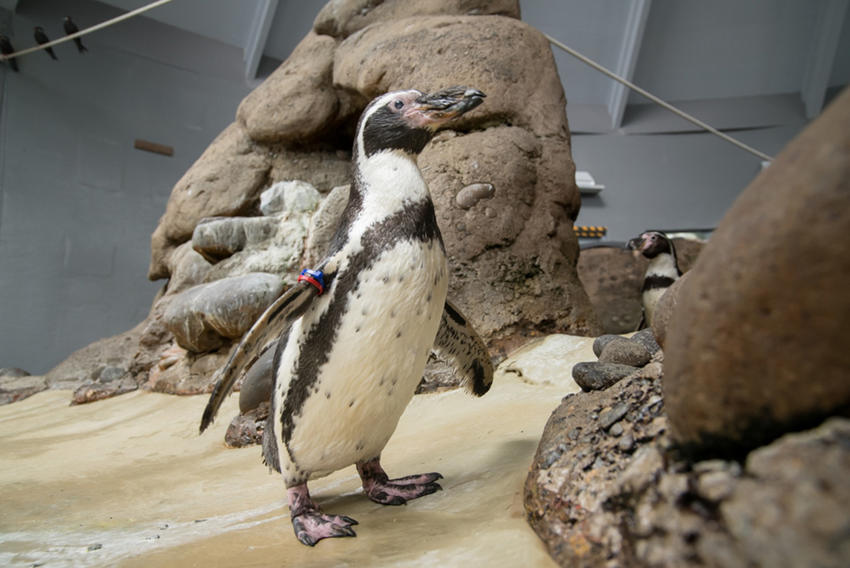 "It was pretty common to walk into the keeper kitchen area and find Mo 'helping' with the food prep or just hanging out with care staff there," Koons said.

Mo was equally fond of visitors to the penguin area, who would meet him on behind-the-scenes tours. Eventually, Koons said, he became the zoo's "greatest ambassador," personally greeting thousands — perhaps tens of thousands — of visitors, and helping to raise awareness about a species in decline. It was a role he seemed to relish. As one former keeper put it, "Mochica rarely met an arm he didn't love to groom."

Wild Humboldt penguins seldom live past 20, and Mochica, who turned 31 in July, had been slowing down for several years. Over the past couple of years, animal-care staff had been monitoring him closely and treating a variety of age-related ailments.

"He had a mature cataract in one eye, old-age haze in the other, bilateral arthritis in his hips," Koons said. "He was just a very old bird. It was hard for him to see, and at times difficult for him to walk."

Koons praised the efforts of care staff, who did everything they could to ease the elderly penguin's discomfort, sneaking a daily dose of meloxicam into his sustainable-seafood breakfast and scheduling regular laser-therapy sessions with specialists from Kenton Animal Hospital. Eventually, though, Mo's conditions deteriorated, and on Saturday veterinary and care staff made the difficult decision to humanely euthanize him.

"It's an incredibly sad day for his care team and for everyone who spent time with this amazing bird," Koons said. "We've all had times in our lives where animals have left an indelible mark on our hearts. Mochica has done that for thousands of people. He inspired generations."

Koons hopes Mochica's legacy will be continued conservation, particularly for Humboldts, which among the most at-risk of penguin species with a population estimated at just 12,000 breeding pairs.

"Humboldt penguins live in a region that's greatly affected by human activity," he said. "They need healthy ocean habitats to thrive, and we can help make a difference — even in simple ways like downloading the Seafood Watch app and choosing sustainable seafood."

Native to the South American coastline off Peru and Chile, Humboldt penguins are classified as "vulnerable" by the International Union for Conservation of Nature, and protected under the U.S. Endangered Species Act. They are threatened by overfishing of their prey species, entanglement in fishing nets, and breeding disruption due to commercial removal of the guano deposits where the birds lay their eggs.