The Oregon Zoo's conservation lab is running on turtle power this week as 23 tiny northwestern pond turtles settle into their new home. Smaller than a walnut, the hatchlings are extremely vulnerable to predators. To give them a fighting chance, the little hatchlings are temporarily brought in from the wild and reared in the zoo's turtle conservation lab until they're big enough to go back to the pond.

"The turtle hatchlings are really tiny, which makes them extremely vulnerable to predators," said Shelly Pettit, who oversees the zoo's Great Northwest area, which includes the pond turtle program. "The biggest threat they face in the wild is bullfrogs, which can eat turtle hatchlings right out of the nest."

The American bullfrog, native to the eastern United States but considered invasive here, is the largest frog species on the continent. It can tip the scales at more than a pound and has been driving pond turtles and a host of other small, vulnerable aquatic species to the brink of extinction. 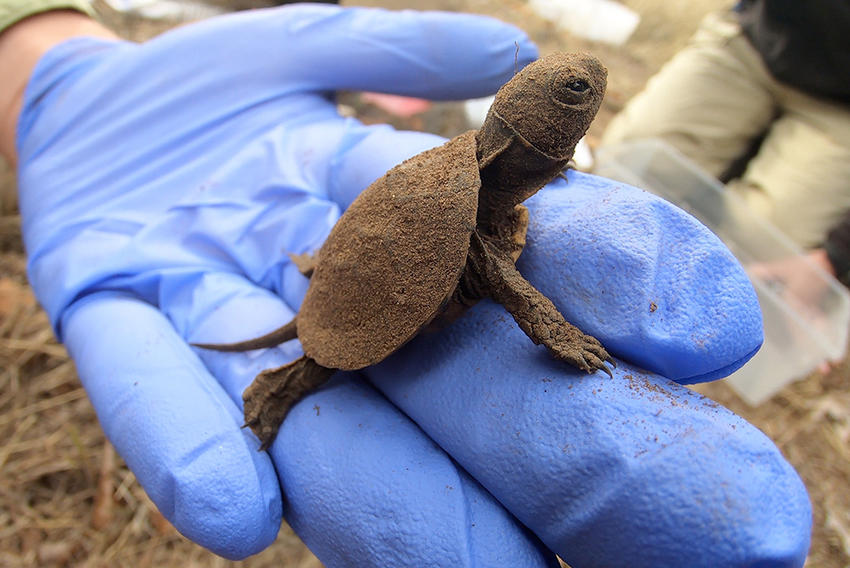 Earlier this week, Pettit and her colleagues helped Washington Department of Fish and Wildlife staff retrieve the 23 hatchlings from sites in the Columbia Gorge. The zoo is "head-starting" these tiny turtles, caring for them until next spring when they will be large enough to avoid the bullfrogs and have a fighting chance on their own in the wild.

Unlike the zoo's recovery efforts for other endangered species like California condors or northern leopard frogs — which take place offsite or behind the scenes — this conservation program is easy to see. Visitors can watch the small turtles as they grow inside the zoo's Nature Exploration Station.

"We keep these little turtles warm, safe and well-fed," Pettit said. "As a result, they grow to about the size of a 3-year-old during the nine months that they stay with us."

"We're at a critical point with this species," said Pettit. "We really have to help grow their population numbers if we're going to save them in time."

Support from the Oregon Zoo Foundation enhances and expands the zoo's efforts in conservation, education and animal welfare. Members, donors and corporate and foundation partners help the zoo make a difference across the region and around the world. To contribute, go to oregonzoo.org/donate.