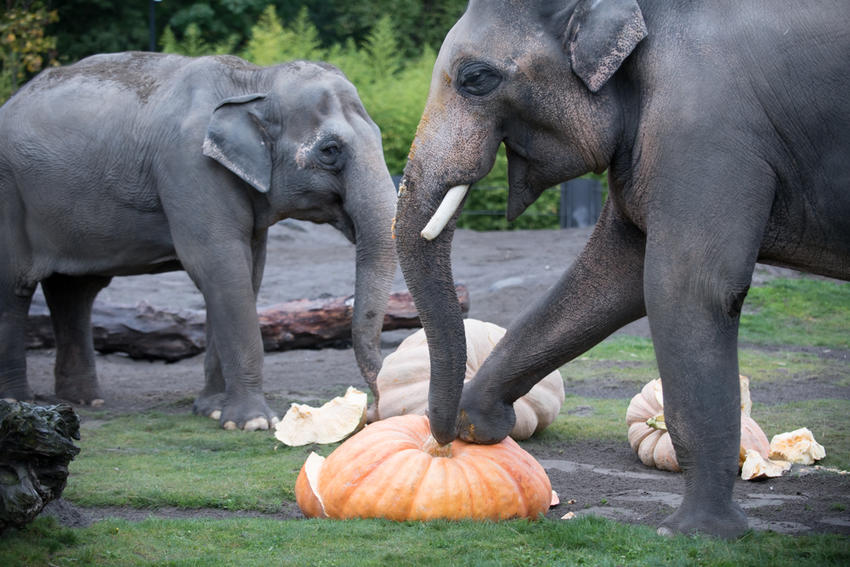 Some of the world’s largest land animals demolished some of the area’s largest pumpkins today, during the Oregon Zoo’s 23rd annual Squishing of the Squash.

With physical distancing requirements and restrictions on large gatherings in place, the zoo wasn’t able to hold a public event this year, but the elephants still had fun, doing all their stomping and chomping this morning before the zoo opened.

“Everything looks a little different for us this year, but the elephants didn’t seem to mind,” senior keeper Dimas Dominguez said. “They got one 650-pound pumpkin and a couple more pretty big ones to play with. First, they destroy them, then they enjoy them.”

The event is a precursor to the zoo’s annual Howloween celebration, presented by The Oregonian, which takes place later this month. Kids can show off their costumes and learn about wildlife in a fun and safe setting, Oct. 23­–24 and Oct. 28­–31.

The Oregon Zoo’s Squishing of the Squash tradition dates back to 1999, when Hoffman’s Dairy Garden of Canby dropped off a prize-winning 828-pound pumpkin for the elephant family. In those days, local farmers often donated overstock pumpkins for use in the zoo’s groundbreaking animal enrichment efforts — improving animals’ well-being by providing stimulating and challenging environments, objects and activities.

The concept of environmental enrichment was established at this zoo back in the 1980s, and the first international animal enrichment conference was held here in 1993.

Support from the Oregon Zoo Foundation enhances and expands the zoo’s efforts in conservation, education and animal welfare. Members, donors and corporate and foundation partners help the zoo make a difference across the region and around the world. To contribute, go to oregonzoo.org/donate.