Endangered frogs hop from Oregon Zoo back into wild 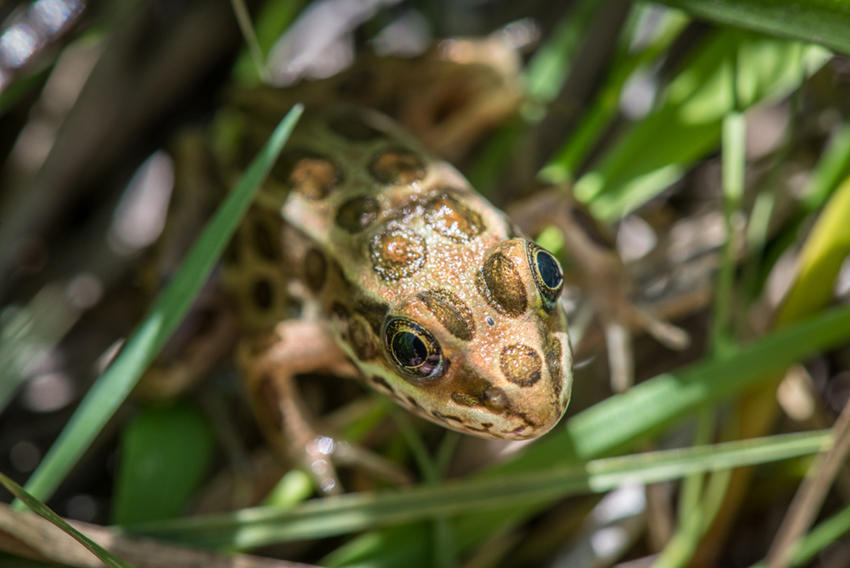 More than a hundred northern leopard frogs reared at the Oregon Zoo are hopping back into the wild this month, thanks to a collaborative effort to save one of the last remaining Northwest populations of this endangered species.

The froglets, which hatched from eggs collected by the Washington Department of Fish and Wildlife earlier this year, spent six months growing big and strong in a protected area at the zoo before being released into the Columbia National Wildlife Refuge earlier this month.

“We keep the eggs safe and healthy until they’re ready to hatch,” said Sara Morgan, who oversees the zoo’s frog-rearing efforts. “Froglets have a much better chance at surviving in the wild on their own than eggs or tadpoles.”

Once abundant throughout North America, northern leopard frogs are rapidly disappearing from their native ranges in Washington, Oregon and western Canada. In Washington, where the zoo-reared froglets were released, the species has been listed as endangered since 1999 and only one known population remains.

Endangered Frogs Hop Back Into The Wild

Biologists attribute the frogs’ decline to a combination of threats, including habitat loss, disease, predation by bullfrogs, pollution and climate change. By head-starting them, the zoo and its conservation partners are hoping to replenish the northern leopard frog population in the region.

Helping the frogs — and the wetland habitat they depend on — will benefit other species as well, conservationists say.

“Northern leopard frogs are an important indicator of water quality,” said Emily Grabowsky, WDFW biologist. “If we can improve and conserve wetland habitat that is good for frogs, we will also benefit other species ranging from other amphibians to waterfowl and deer.”

Funding for the northern leopard frog reintroduction is being provided through a competitive state wildlife grant awarded to WDFW from USFWS’s Wildlife and Sport Fish Restoration program.