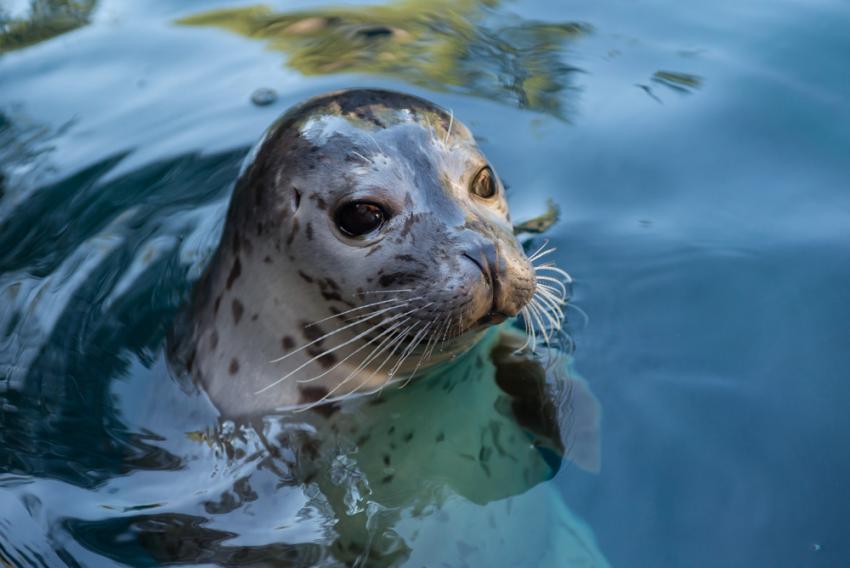 Tongass, Atuun and Kaya are settling in at zoo's Steller Cove habitat

Three new harbor seals arrived at the Oregon Zoo over the weekend, and visitors can already see the playful pinnipeds diving through the clear waters of the zoo's recently refurbished Steller Cove.

The new arrivals are an 8-year-old male named Tongass, an 11-year-old female named Atuun and her 4-month-old pup, Kaya — all from the Alaska SeaLife Center in Seward, Alaska. Their large, round, soulful-looking eyes — adapted for underwater sight — call to mind a Margaret Keane painting come to life.

Harbor seals have spotted coats that are as unique as human fingerprints and can range in color from silvery white to brownish black. Visitors can tell the three new arrivals apart as follows:

Zoo curator Amy Cutting, who oversees the zoo's marine life area, says the new harbor seals are curious and playful, and have been adjusting well to their new home. They are living in the space that formerly housed Steller sea lions Julius and Gus, a beloved pair of 1,000-pound behemoths who died in February 2014 and March 2015 at the ages of 26 and 27, respectively. (In the wild, male sea lions seldom live past the age of 18, and Julius and Gus were believed to be the oldest males of their species on the planet.)

Before bringing any new residents to Steller Cove, zoo officials decided to update the habitat over the summer, recoating the pools to protect against the effects of a saltwater environment. Cutting expects the zoo will again house Steller sea lions in the future, this time in a mixed-species environment with the harbor seals.

Wild harbor seals swim close to shore and haul out on protected beaches or rocky islands to bask or sleep in the sun. They stay alert and close to the water's edge as they rest, and slip quickly into the sea at any sign of danger.

Harbor seals are graceful underwater and can swim forward, backward and upside-down, but they are awkward on land, where they flop along on their bellies. Depending on what they're hunting, they dive 300 to 1,500 feet. During a dive, their nostrils close and their heart rate slows from 100 beats per minute to about 5 beats per minute. These changes allow them to stay underwater as long as 35 minutes.