Red-headed stranger from Texas moves in at Oregon Zoo 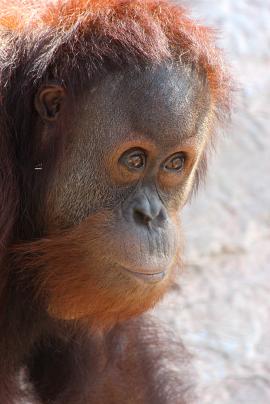 Inji, the Oregon Zoo's geriatric orangutan matriarch, can expect some rejuvenating company soon. Kumar, a "spunky" male orang from the Gladys Porter Zoo in Brownsville, Texas, arrived in Portland last week and will be joining Inji and the zoo's white-cheeked gibbons at Red Ape Reserve sometime in the next few months.

"Kumar is a typical 9-year-old male," said Oregon Zoo primate keeper Scott Jackson, who traveled to Brownsville last month to meet the young orang. "He's spunky and very curious about his environment. Inji has a strong personality, so we expect that once the two are together Kumar and Inji will get along well, and he will definitely keep Inji active."

Keepers anticipate Kumar's presence will have a rejuvenating effect on Inji, who at 54 is the oldest Oregon Zoo resident and one of the oldest orangutans anywhere. According to the Association of Zoos and Aquariums, the median life expectancy for female Sumatran orangutans is 32, though they have been known to live to 60.

Kumar arrived at PDX Nov. 6 aboard a FedEx cargo plane, accompanied by Jackson and veterinarian Mitch Finnegan, who traveled to Texas beforehand to ensure the orangutan's safe journey.

"The transfer couldn't have gone any better," said curator Jennifer Davis, who met them on their arrival at the airport. "Kumar was calm during the flight, and seems to be adjusting well to his new surroundings. I'm so proud of our staff for putting in extra time working with the Gladys Porter Zoo to make this transfer as smooth as possible."

Following a standard 30-day quarantine period, Kumar will spend some time adjusting to his new surroundings and then will be introduced to Inji once the zoo's animal-care staff feels he is ready.

"We'll be taking everything one step at a time," said Asaba Mukobi, the zoo's senior primate keeper. "Sometimes introductions go quickly and sometimes they go slowly. It just depends on the individuals."

"Orangutans are at a really critical point right now in their native lands," Mukobi added. "Habitat loss, palm oil plantations and an illegal pet trade have pushed them to the brink of extinction in Sumatra and Borneo."

According to the conservation group Orangutan Outreach, it could be fewer than 10 years before orangutans have completely vanished from the wild. North American and European zoos are participating in coordinated breeding programs to help preserve the species. The Oregon Zoo also supports the Borneo-based Hutan-Kinabatangan Orangutan Conservation Program, which works to research, protect and reduce human-wildlife conflict for species including orangutans and elephants.