Amelia Gray, the 5-year-old polar bear and newest Oregon Zoo resident, met her half-sister Nora for the first time this week. The two furry friends romped around Polar Passage, playfully sparring, chasing one another and splashing into their saltwater pool.

"Polar bear introductions can be very intense so we took it slowly at first," said Amy Cutting, who oversees the zoo's polar bear area. "But they made it very clear they wanted to be together, and their care team listened. Now the two are having a great time playing and hanging out. We'll continue to keep a close eye on their interactions, but things are off to a great start." 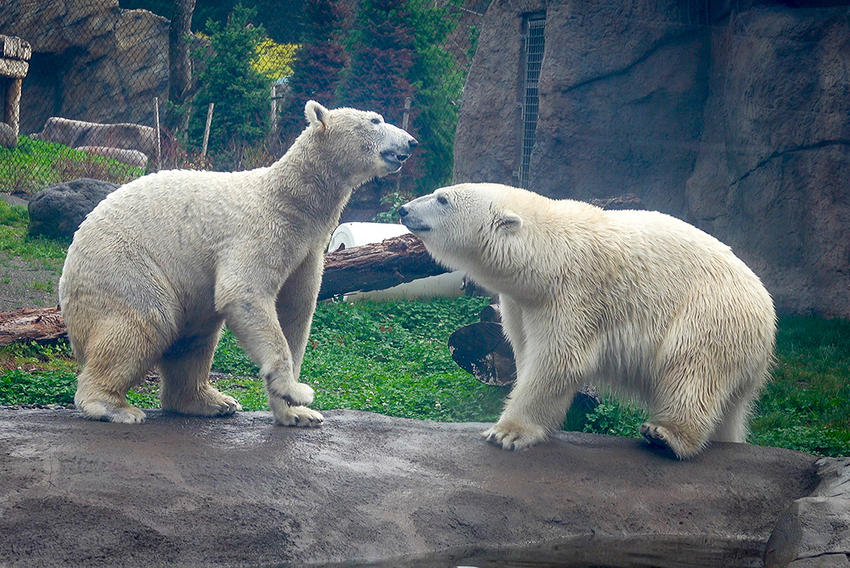 Before this week's meet-up, Amelia Gray had been getting familiar with Polar Passage on her own since arriving in Oregon last month. With its two large connecting habitats, each with a large saltwater pool, shelters and natural terrain, the new area was designed to provide bears with their own space as well as opportunities to socialize.

"Polar bears are highly intelligent and playful with one another, but it's important to have the option for 'alone time,' as well," Cutting said. "Because of the way we designed this space, they can choose to spend time together or separate themselves."

Cutting says visitors will likely see more playful wrestling, swimming and diving from the two bears in the coming weeks.

"They are getting on like a house on fire," Cutting said. "We could not be happier for both of them."

The zoo is working with Polar Bears International, the U.S. Geological Survey and other partners on projects that will shed new light on how climate change is affecting polar bears in the Arctic. As sea ice disappears, polar bears struggle to find and catch seals, making it harder for them and their cubs to survive. The species is classified as threatened under the U.S. Endangered Species Act, and the International Union for the Conservation of Nature's Species Survival Commission has designated the species as facing a high risk of global extinction.

Polar Passage is one of eight major projects made possible by a community-supported zoo bond measure passed in 2008. Many of the habitat's features were funded through donations to the Oregon Zoo Foundation, which supports zoo's animal welfare, conservation and education efforts. To learn more or to make a gift, call 503-220-2493 or email foundation@oregonzoo.org.