Zoo welcomes young polar bear with a 'touch of gray' 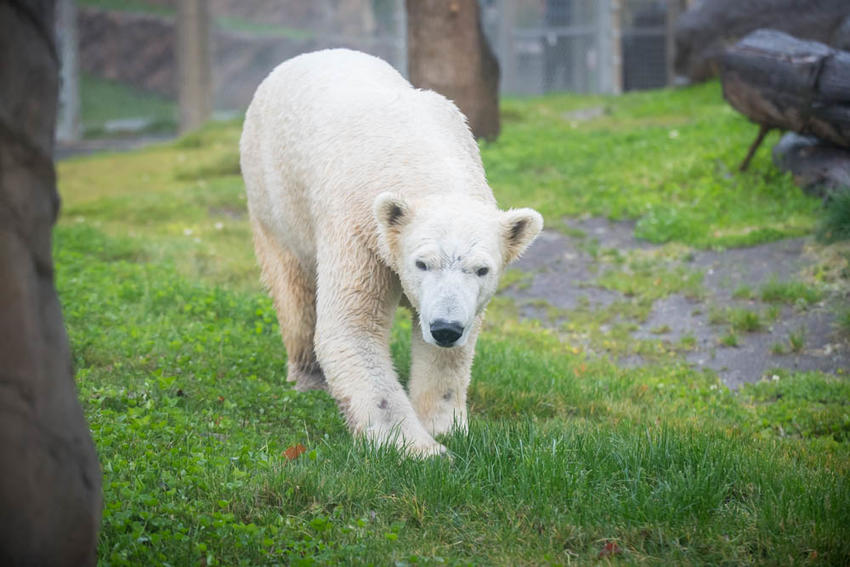 Amelia Gray, a 5-year-old polar bear from the Maryland Zoo, has arrived in town, and is settling in at the Oregon Zoo’s new Polar Passage habitat, where caregivers eventually plan to introduce her to her half-sister Nora.

“Even though they’re siblings just a year apart in age, Nora and Amelia Gray have never met so it won’t be a family reunion,” said Amy Cutting, who oversees the zoo polar bear area. “Polar bears have a pretty solitary nature, but we do hope these two will form a positive relationship.”

Amelia Gray was born at the Columbus Zoo on Nov. 8, 2016, and moved to the Maryland Zoo in 2018. The young polar bear’s unusual name reflects both her role as ambassador for an endangered species and a unique physical marking: Amelia means “defender,” while Gray refers to a small patch of gray fur along the left side of her neck.

“We hope visitors will be able to see the bears playing together soon, but that will really be up to them,” Cutting said. “Amelia Gray is not as outgoing as Nora, according to her keepers, and she likes to have some ‘alone time’ — so we plan to give her as much space as she needs to settle in and be comfortable in her new home.”

Cutting said the flexibility of Polar Passage — with its two large connecting habitats, each with a saltwater swimming pool, shelters and natural terrain — can provide the new bear with her own space as needed and opportunities to socialize once she’s ready.

As climate change reduces Arctic sea ice, polar bears struggle to find and catch seals, making it harder for them and their cubs to survive. The species is classified as threatened under the U.S. Endangered Species Act, and the International Union for the Conservation of Nature’s Species Survival Commission has designated the species as facing a high risk of global extinction.

The zoo is working with Polar Bears International, the U.S. Geological Survey and other partners on projects that will shed new light on how climate change is affecting polar bears in the Arctic.

Polar Passage is one of eight major projects made possible by a community-supported zoo bond measure passed in 2008. Many of the habitat’s features were funded through donations to the Oregon Zoo Foundation, which supports zoo’s animal welfare, conservation and education efforts. To learn more or to make a gift, call 503-220-2493 or email foundation@oregonzoo.org.